Oh, So That's Why Southwest Airlines Is Canceling All These Flights 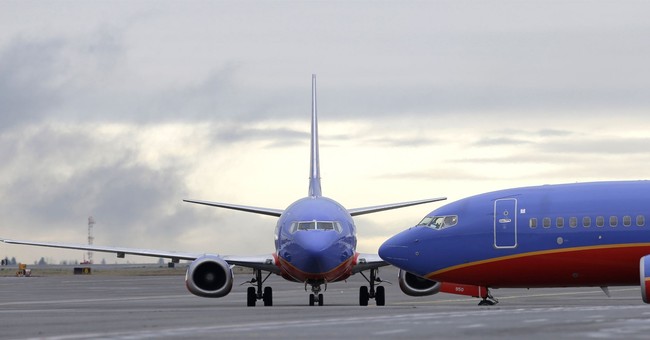 Leah wrote about this fiasco yesterday. When A&E had the show "Airline," it almost always showed Southwest Airlines in a negative light. It wasn't always the airlines' fault, but any executive would probably not like the cumulative effect of the show, which is showing Southwest bumping people off flights and the inevitable tantrum that follows.

Now, in the era of COVID vaccine mandates brought to us by President Dementia and Lord Emperor Fauci, we have another case of mass disruptions with the airline, but it's for a good reason. Well, for those who aren't traveling, it's a good reason. Thousands of flights were canceled over the past couple of days because employees did not want to abide by the vaccine mandate. They reportedly filed a lawsuit to block the mandate. The reasoning the media and the company are doling out right now is that there were some staffing and weather issues. Yeah, sure, Jan (via Outkick):

Southwest Airlines canceled over 1,800 flights over the weekend, leaving thousands of Americans stranded at airports. Why so many? Southwest blames the unusual cancellation rate on air traffic control and weather issues.

“[Air Traffic Control] issues and disruptive weather have resulted in a high volume of cancellations throughout the weekend while we work to recover our operation. We appreciate your patience as we accommodate affected Customers, and Customer Service wait times are longer than usual,” Southwest Airlines tweeted.

Why is no one in the mainstream media discussing Southwest Airlines right now?

They’re afraid of a trend catching on!

Southwest Airlines canceled more than 1,000 flights over the weekend, leaving passengers stranded across the country.

The cancellations came after pilots asked a court to block the company's new vaccine mandate, but Southwest offered other explanations. https://t.co/Qqp8j3GJPc

Airline insiders and conservatives are are wondering if the cancellations are part of a "sick out" in response to the vaccine policy.

Southwest's pilots' union said the cancellations were not part of a planned labor demonstration.

More than 25% of the airline's flights were canceled on Sunday per the FlightAware tracker.

"We can say with confidence that our pilots are not participating in any official or unofficial job actions," it said in a press release. "Our pilots will continue to overcome SWA management’s poor planning, as well as any external operational challenges."

The other side: Southwest said the cancellations and delays were caused by "disruptive weather" and air traffic control "issues," though no other airlines were impacted so dramatically.

Look, I get it. Airlines can make people's lives hell on travel days, but the weather canceled 1,800 flights? Really? Was this a superstorm? Regardless, the establishment media is running with the bad weather narrative, which looks as pathetic as Biden's poor polling numbers.

Southwest Airlines Offering Free Flights To All Passengers Who Are Vaccinated And Can Fly A Plane https://t.co/GdEG7UQEV4