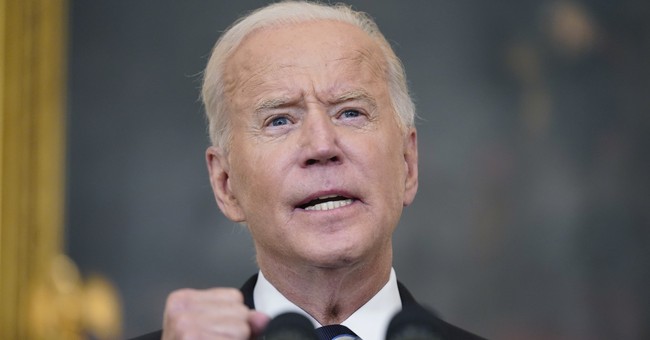 For all the talk about Donald Trump having a thin skin, Joe Biden is probably worse. It was the 20th anniversary of the heinous 9/11 attacks this weekend—and he decided to make it all about himself. He obviously knows about the “f**k Joe Biden” chants heard at college football across the country. He’s also obviously seen more than a sign or two from Trump supporters as he visited disaster-struck portions of the country after Hurricane Ida. Inflation is rising. Job creation is in the toilet. And we still have Americans trapped in Afghanistan. He also can’t get his protocols or his advice straight on COVID.

Yeah, Joe Biden is sucking. He’s lost middle America. He’s underwater in his approvals. And yes, that chant is very appropriate as crisis after crisis seems to be burn without much attention from this White House.

C-Span had the clip. Here’s what Joe thought on that solemn day:

“What would the people who died be thinking? They think it makes sense to be doing this kinda thing where you ride down the street and see a sign that says ‘F so-and-so’?” pic.twitter.com/gbOPWrxajd

“What would the people who died be thinking? They think it makes sense to be doing this kinda thing where you ride down the street and see a sign that says ‘F so-and-so’?”

There are literally a million things Joe could have said that didn’t lurch into ‘why do people hate me.’ Yet, I’m sort of happy that this stuff is getting under his skin. There’s no way this clown got 81 million votes. And it seems those who did back dementia man are regretting it—big league.