When the Taliban Seizes That Many Weapons, I Would Hope Biden Would Sign Off on These Operations 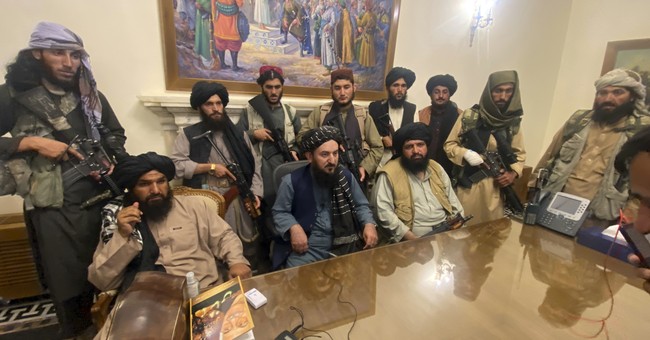 You saw the reports that the Taliban has an arsenal of US-made weapons. They seized them as the Afghan military melted away and the government collapsed. Last weekend, the Taliban rolled into Kabul and have retaken the country. Our 20-year war ends just how it started: the Taliban in control. The Biden administration has been besieged by the media and our allies aboard for this fiasco. Europe was kept in the dark. In June, Biden promised them that Kabul would remain secure because he would ensure enough troops would remain. That didn’t happen. The Taliban are beating people outside of the airport in the capital. Americans are reportedly being beaten. There are checkpoints everywhere, and some 10-15,000 Americans remained trapped behind enemy lines. Right now, we’re trusting the Taliban to ensure the safe passage of our people. It’s insane.

Now, given the number of US-made weapons and armored vehicles seized by the Taliban, the Biden administration is mulling airstrikes to take out other weapons before they can be captured by the enemy. I would hope so. Over 600,000 weapons are now in Taliban hands on top of the Humvees and MRAPS (via Axios):

So @JoeBiden left BILLIONS in American military gear to fall into the hands of our enemy but expects Americans he left behind to find their own way to the airport, which is surrounded by that same enemy armed with our gear AND pay their own way home?!

BREAKING: Biden administration considering launching airstrikes on equipment left behind by US troops in Afghanistan - @Axios

Video shows militants inspecting lines of vehicles and opening crates of new firearms, communications gear and even military drones. Some of the equipment was given by the U.S.

U.S. officials aren't just worried about the Taliban using the weapons against civilians. They're also concerned the equipment could be seized by ISIS or handed over to China or Russia.

Details: The equipment includes over 2,000 armored vehicles, and up to 40 aircrafts, Reuters notes, citing an intelligence assessment.

Yes, but: They also fear that such a move could provoke the Taliban at a time where the U.S. is focusing on evacuating people from Afghanistan.

What they're saying: "Everything that hasn't been destroyed is the Taliban's now," one U.S. official told Reuters.

Oh, this is Obama syndrome also known as paralysis by analysis. Biden and his people were told throughout the summer the situation on the ground was not as rosy as the talking points they peddled to the American people. State Department memos and those from our intelligence community were quite adamant that this government we installed was not going to last, and that for sure—the Taliban was going to make significant land grabs in the future. That alone should have triggered protocols to accelerate the evacuation of our citizens and the Afghans who helped our troops along with their families. Biden didn’t care. He’s obviously not engaged. He just chucked this one up to luck and hope—hope that no chaos would ensue. Even his address yesterday was ripped apart by EVERYONE, including the media and his own officials for being grossly inaccurate specifically about access to the airport in Kabul, the lack of an al-Qaeda presence, and this narrative that things are orderly now. It’s not. It’s still a shambles.