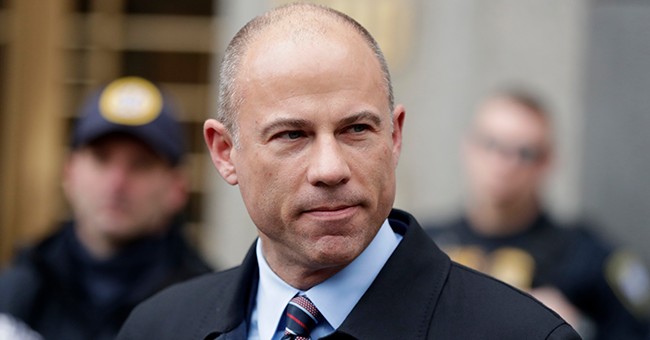 Oh, how the mighty have fallen? Well, maybe not mighty—egotistical for sure. Anti-Trump lawyer Michael Avenatti who made liberal media mouths salivate over this incessant and ultimately quixotic crusade against the Trump administration is going to jail. It was something unrelated to his Trump fight. He tried to extort Nike out of millions of dollars. Yeah, of all things, he took on the goliath called Nike and got rolled for it—and rightfully so. The guy is a sleazebag and he’ll be a guest of the government for the next two-and-a-half years. At his sentencing yesterday, Avenatti reportedly cried like a little girl, with the judge also shredding him for going totally off the hinges when he obtained national name recognition (via WaPo):

Michael Avenatti — the lawyer who made headlines representing an adult-film actress who claimed an affair with former president Donald Trump — was sentenced to 30 months in prison on Thursday for trying to extort Nike, Inc.

Avenatti was convicted in February 2020 of transmission of interstate communications with intent to extort, attempted extortion and honest services wire fraud in connection with efforts to shake down Nike for as much as $25 million during what he said was a negotiation for his client, a youth basketball coach.

Prosecutors argued at trial that Avenatti was trying to earn a payday for himself, at the expense of Nike’s reputation and trading value, by threatening to expose alleged wrongdoing within the company if it did not meet his demands to settle.

The youth basketball coach, Gary Franklin, didn’t know Avenatti was using his name to try to negotiate a hefty payday with the athletic apparel giant, according to prosecutors.

They alleged that Avenatti approached Nike with the demand just before the company’s quarterly earnings call and with the high-profile NCAA basketball tournament about to start. He allegedly insisted that the company pay him and another attorney millions of dollars to investigate internal wrongdoing. If not, he allegedly said, he would expose what he knew.

Yet, even after the judge slapped down Avenatti, he cut him a break. He could have been locked up for up to 11 years. He got 30 months. Avenatti gained notoriety for representing Stormy Daniels, an adult entertainer who allegedly had a one-night stand with Donald Trump. He promised that Trump’s presidency would end because of him. Not the case. He also tried to derail the Supreme Court nomination of Brett Kavanaugh by representing Julie Swetnick, a woman who alleged that a young Kavanaugh was part of a gang-rape ring in high school. It was a totally false story. Swetnick pretty much backtracked all of it. It was an overreach that some say made moderate Republican Sen. Susan Collins (R-ME) comfortable enough to vote in favor of his confirmation.

Not a single person from CNN will look at a camera and admit hyping this guy up to no end and apologizing. Not Scuitto. Not Tapper. Not Stelter. Not Anderson. Not Lemon. Not Cuomo. Not a single one. Forget that it ever happened and move on. https://t.co/eWowpcZpAq

Every lib journo that had Avenatti on their show to boost him up are complicit in his crimes. You inflated his ego so that he thought he could get away with anything.