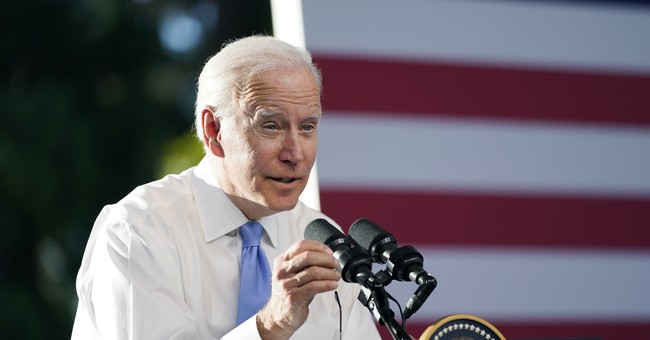 Democrats can't change the law. They don't have the legislative majorities to do so. They appealed to the public. They paraded dead kids in the hopes to advance their agenda. It failed. For years, it failed.

Now, Biden and his crew have decided to engage in what could only be described as a backdoor gun ban of firearms that are in common use. Some 10-40 million law-abiding Americans could now land in legal trouble over the administration's push to ban pistol braces. There is no grandfather clause. These guns must either be registered, disassembled, or turned over to the authorities. It's aptly described as the largest gun confiscation and registration effort in history.

And now, Senate Republicans are mobilizing to stop this gun grab. Stephen Gutowski of The Reload has more (via The Reload):

The senators blasted an ATF proposal to reclassify guns equipped with the braces as short-barrel rifles and subject them to the National Firearms Act (NFA). They warned the reclassification would mean owners who don’t register their guns would face felony charges and up to 10 years in federal prison per gun.

“The way the proposed rule is written makes clear that ATF intends to bring the most common uses of the most widely possessed stabilizing braces within the purview of the NFA,” the senators said in the letter. “Doing so would turn millions of law-abiding Americans into criminals overnight, and would constitute the largest executive branch-imposed gun registration and confiscation scheme in American history.”

President Joe Biden (D.) doubled down on the brace ban on Wednesday in his newly-announced strategy to combat the rise in violent crime. The ATF cited just two crimes committed with braced pistols, mass shootings in Ohio and Colorado, in the proposal but did not explain whether or not the brace contributed to those crimes. The Republican senators said the proposal would do nothing to reduce the recent murder spike.

“A crime wave is sweeping America,” they said. “These aren’t broken-windows crimes; they are violent crimes like murder, assault, and robbery. But rather than cracking down on the criminals who are turning America’s cities into warzones, ATF and the Department of Justice have decided to go after law-abiding gun owners who are minding their own business and using equipment that ATF seemingly blessed in 2017.”

The White House and Department of Justice did not respond to a request for comment. April Longwell, chief of the ATF’s Public Affairs Division, said the agency “cannot comment on the proposed rulemaking, nor on the communications between the agency and Congress.”

Oh, who are the two Republicans who refused to sign onto this communique? That would be Sens. Rob Portman (R-OH) and Susan Collins (R-ME). They offered no comment.

And speaking of comments, the rule change is open for public discussion. Some 30,000+ comments have been posted over this unconstitutional regulation tweak. It's a test-run for what the anti-gun Left has dreamed of for years. It's a parade of horrible, and for some reason, two GOP senators want to sit on the sidelines. We should have expected Collins to be weak sauce on the fights that define us as a national party.