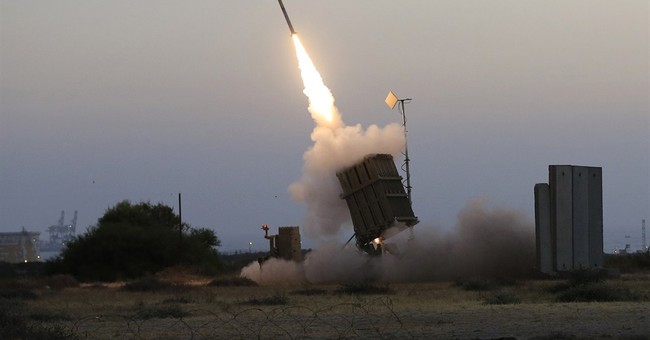 I know there are a lot of bad takes on the Israel-Palestinian conflict, but efforts that save Israeli lives being viewed as an avenue that perpetuates this decades-long dispute is a whole new level of idiocy. What the hell is this? The Washington Post recently published a column that lamented that Israel’s Iron Dome defense system that stops some 90 percent of incoming rockets from terrorists is a problem. Why? It saves too many Israelis. Yeah, you read that right. The Iron Dome protects innocent civilians while giving the Israeli Defense Forces the ability to strike back at Hamas with superior firepower.

Israel is too good at defending itself and protecting its people, therefore, it’s their fault that Hamas, a noted terror group that wants to destroy the Jewish state, keeps firing rockets and trying to kill more innocent civilians. It’s a bit perverse that Hamas is being treated as a principal actor of equal standing to Israel. They’re terrorist garbage, and Palestine is not a state. Some of the coverage is arguably pro-terrorist, with calls to see this conflict through the eyes…of murderers who call themselves members of Hamas. Guy ripped into this op-ed as well. It’s ludicrous (via Fox News):

The Washington Post says the Iron Dome keeps too many Israelis alive. pic.twitter.com/TX9cxX9Whn

A Washington Post "analysis" piece raised eyebrows Friday after it explored the supposed downsides of the Iron Dome defense system, arguing it perpetuates the Israeli-Palestinian conflict because the Jewish state has "less incentive to find a political solution."

The intercept system has prevented thousands of Hamas rockets from hitting their targets over the past decade, and it's again been successfully employed the past two weeks as the Islamist terrorist group has rained fire on Israel. But the piece by Yagil Levy fretted that because it enabled Israel to fire back with superior air strikes on Hamas-controlled Gaza, it may have the "perverse consequence" of perpetuating the conflict.

"The unintended consequences of this protective system complicate the story — by reducing the expected costs of bombing Gaza, Iron Dome allows Israel to act with less concern for civilian casualties, and gives Israel less incentive to find a political solution to its conflict with Gaza," wrote Levy, a professor of public policy and political sociology at the Open University of Israel.

"By intercepting almost all incoming rockets, Iron Dome released the Israeli leadership from political pressure to resolve the Gaza-Israel conflict, except from promoting short-term steps to improve the economy in Gaza," Levy wrote, adding, "The reduced pressure to resolve the conflict with Gaza also means Iron Dome gives Israelis a false sense of security, based on technological success — which isn’t guaranteed forever — rather than political solutions."

Defending yourself only pours more gas on the fire is the position we’re taking, huh? Is this the Israeli Left? If so, no wonder why their credibility has gone up in flames. Who takes this position seriously who isn’t already anti-Israel? And when did radical Islamic terrorism quietly become an acceptable position to frame a question like this as if this was a legitimate debate? It’s not. No matter what, if you’re a terrorist, you only deserve one thing: death. And every state has the right to defend itself.

Israel’s defense systems are problematic? It’s as if these people think that when these Islamic terrorists say they want to push Israel into the sea it’s more of a metaphor. No, it’s a stated position. Israel has no strategic depth so every threat must be taken as an existential one. Self-defense is bad because…only Israel can do it. That’s crap. How about Hamas stop being evil murderers? That could also be an option.