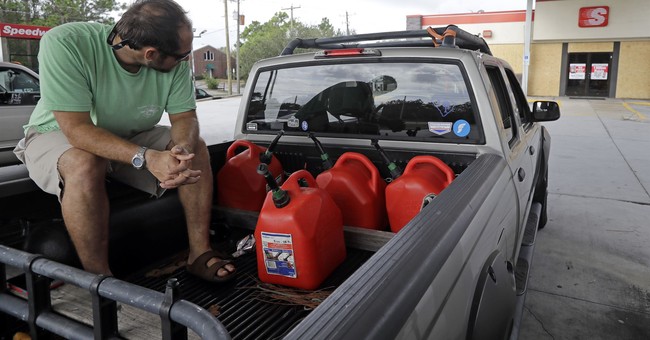 We all know Democratic economic policies kill us. They torch our wallets. Our grocery bills. We feel the pain at the pump. Right now, that pain is about to be amplified, though it’s not necessarily Biden’s fault this time. If you haven’t filled your gas tank and you live in the eastern part of the United States, do it now. Gas prices could spike astronomically after a cyberattack shut down a major pipeline over the weekend. It could last for days. We don’t know. Biden has been briefed and they’re working to get this pipeline operational again, but who knows when that could be. For now, Colonial Pipeline’s entire 5,500-mile network is offline (via NYT):

One of the nation’s largest pipelines, which carries refined gasoline and jet fuel from Texas up the East Coast to New York, was forced to shut down after being hit by ransomware in a vivid demonstration of the vulnerability of energy infrastructure to cyberattacks.

The operator of the system, Colonial Pipeline, said in a vaguely worded statement late Friday that it had shut down its 5,500 miles of pipeline, which it says carries 45 percent of the East Coast’s fuel supplies, in an effort to contain the breach. Earlier Friday, there were disruptions along the pipeline, but it was not clear at the time whether that was a direct result of the attack or of the company’s moves to proactively halt it.

On Saturday, as the F.B.I., the Energy Department and the White House delved into the details, Colonial Pipeline acknowledged that its corporate computer networks had been hit by a ransomware attack, in which criminal groups hold data hostage until the victim pays a ransom. The company said it had shut the pipeline itself, a precautionary act, apparently for fear that the hackers might have obtained information that would enable them to attack susceptible parts of the pipeline.

Administration officials said they believed the attack was the act of a criminal group, rather than a nation seeking to disrupt critical infrastructure in the United States. But at times, such groups have had loose affiliations with foreign intelligence agencies and have operated on their behalf.

on Saturday, Colonial, which is privately held, declined to say whether it planned to pay the ransom, which frequently suggests that a company is considering doing so, or has already paid. Nor did it say when normal operations would resume.

In the next week or so, the administration is expected to issue a broad-ranging executive order intended to bolster security of federal and private systems after two major attacks from Russia and China in recent months caught American companies and intelligence agencies by surprise.

Colonial’s pipeline transports 2.5 million barrels each day, taking refined gasoline, diesel fuel and jet fuel from the Gulf Coast up to New York Harbor and New York’s major airports. Most of that goes into large storage tanks, and with energy use depressed by the coronavirus pandemic, the attack was unlikely to cause any immediate disruptions.

So, that’s the good news. We’re not totally paralyzed, but prices will go up if this situation isn’t resolved soon, which is buried in this piece. Shortages could be seen stretching from Alabama north through Baltimore. Think of the BP oil spill in 2010. Inflation has already hit Americans hard. And now we have this to deal with potentially at the pump. Someone should ask Circle Back Jen Psaki about this today.