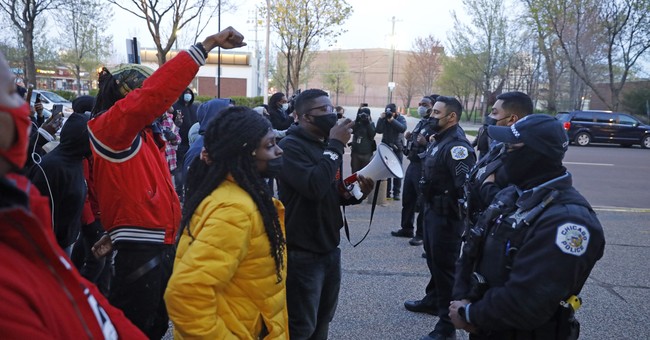 "CNN sucks." You all remember that chant. It’s been a mainstay among Trump supporters due to the network’s hilariously bad reporting and overt bias against the 45th president. Well, it’s now leeching into other topics. What issues? Well, it’s now pretty much everything.

As we await the verdict in the Derek Chauvin case, the greater Minneapolis area is dealing with the shooting death of Daunte Wright at the hands of police in Brooklyn Center. In Chicago, recent bodycam footage from last month shows the tragic officer-involved shooting death of Adam Toledo. He was only 13 years old, but video evidence clearly shows he had a gun. The shooting occurred in the early morning hours on March 29, around 2:30 in the morning. Chauvin is the former officer at the center of George Floyd’s death, which set off a wave of unrest, looting, vandalism, and outright mayhem across the country last year.

We’re back to issues about police brutality, use of force, and overall reform. Yet, CNN’s Chris Cuomo says none of that will happen until white kids start getting shot by police. We’ll get to that in a second, but here’s this repugnant hot take that was clipped by our friends at Newsbusters:

On Friday, he took things to his darkest level yet as he went on an unhinged screed about how “white people's kids” need to be killed off in droves in order for gun control to be passed and the police to be abolished. Hang on tight because it’s very disgusting.

After putting on a ridiculous voice and suggesting people who supported police believed “comply or die,” Cuomo’s eyes became wild and manic as he described what was needed for reform to happen.

Cuomo then concocted a perverted fantasy of a white kid getting killed and calls for reform afterward:

Smoking that doobie that's actually legal probably in your state now, but they don’t know what it was and the kid runs and then pop, pop, pop, pop! The cop was justified. “Why did you run?” Oh, he had a baseball game tonight. Oh, white kid, big family, that house over there? Those start piling up. “What is going on with these police?” [Frantic noises] “Maybe we shouldn't even have police.”

Honestly one of the most ignorant and most poorly informed individuals to have a major media platform. It's actually impressive just how little he knows about all the subjects he talks about. https://t.co/AWJbxvGnOf

Uh, well, for starters, white people do get shot and killed by police, Chris. In fact, 457 were shot and killed by police in 2020. So, it already does happen. To call for more death within a radical group because a particular lefty action item has stalled is not only absurd but outright insane. Are the wheels coming off the cart here for liberals? After years of peddling bad ideas, they’re just going to hope death and destruction occur to create a moment of opportunity? These are hyper-emotional people who value feelings over facts. And death surely brings out a lot of feelings that blind people, especially those of the liberal mindset, to a host of byproducts. The mayor of Brooklyn Center suggested that cops don’t need to be armed to conduct traffic stops. It’s almost too stupid to be believed, but he said it. It’s a policy that is guaranteed to get cops killed, but the feelings, remember?