Is Russia Preparing Another Major Invasion? 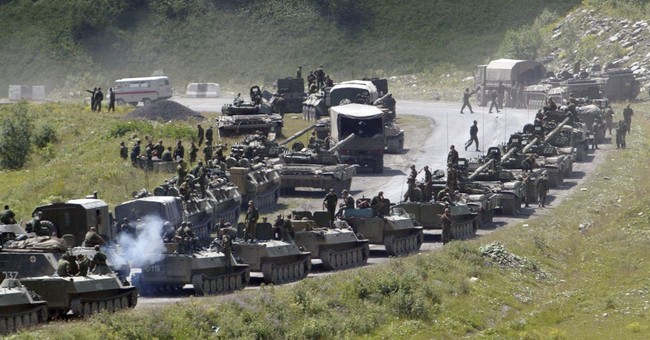 As the world still grapples with COVID and Japan announces a plan to dump radioactive water from the Fukushima reactor back into the sea, which has angered its neighbors, Russia has mobilized a sizeable force along the Ukraine border. It’s déjà vu all over again. In 2014, Biden was vice president under Barack Obama when Russia straight-up invaded and annexed the Crimea peninsula. Moscow knew Obama would do nothing. He was weak. Obama would lecture and give a speech, but nothing would be done. Does Russia see an apple that doesn’t fall too far from the tree scenario here? They’ve reportedly amassed tens of thousands of troops on the Ukrainian border. Are they planning to finish the job? (via CBS News):

Ukraine's government said on Monday that requests by President Volodymyr Zelenskyy to speak with his Russian counterpart Vladimir Putin about the escalating conflict in eastern Ukraine had been ignored. Moscow denied receiving any request from Kyiv for such talks.

Tension between the neighbors has grown steadily for several weeks, with intensified skirmishes in eastern Ukraine — a region that has been mired in conflict since Russia first backed Ukrainian separatists there seven years ago. Putin has sent thousands of forces toward the Ukrainian border recently, raising concerns among politicians in the United States and European Union.

"The president's office, of course, made a request to speak with Vladimir Putin. We have not received an answer yet and we very much hope that this is not a refusal of dialogue," Ukrainian presidential spokeswoman Iuliia Mendel told Reuters on Monday.

"President Biden's been very clear about this: If Russia acts recklessly or aggressively, there will be costs, there will be consequences," Blinken said during an interview over the weekend.

Oh, please—there will be no response if Russia invaded. None. Blinken was rolled by the Chinese in Alaska, so as far as I’m concerned, his reliability with selling America’s robust strength aboard is shot. Russia says the troop movements are in response to NATO. BBC also posted something explaining why this might not be a prelude to an invasion. Either way, Russia probably sees another four years of unchecked power in the region since Biden and the Democrats are just a retread of the Obama years, albeit a bit more woke but just as feckless on foreign policy.

President Biden on Thursday signed an executive order declaring a "national emergency" over the threat from Russia, as his administration slapped new sanctions on the country.

The U.S. Department of State said it is expelling 10 officials from Russia’s bilateral mission.

"Today, we announced actions to hold the Russian Government to account for the SolarWinds intrusion, reports of bounties on U.S. soldiers in Afghanistan, and attempts to interfere in the 2020 U.S. elections," Secretary of State Antony Blinken said in a statement.

The White House also released a letter to Congress stating that the president has issued "an Executive Order declaring a national emergency with respect to the unusual and extraordinary threat to the national security, foreign policy, and economy of the United States posed by specified harmful foreign activities of the Government of the Russian Federation."

The letter said that Russia had aimed to "undermine the conduct of free and fair democratic elections," engaged in "malicious cyber-enabled activities," targeted journalists and dissenters outside of its borders, and violated international law.

Funny coming from the vestiges of a past administration that mocked Republicans for having a 1980s-mindset about Russia in 2012.