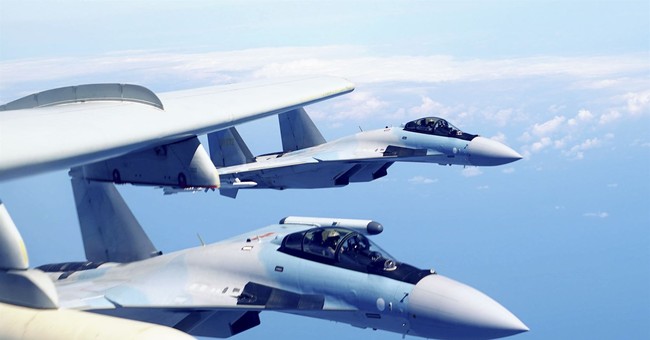 Joe Biden’s weakness to stand up to China is being seen before our eyes. Actually, it might not be weakness since Beijing paid the Biden family millions with an access deal that ultimately was not made. Hunter and Joe were the principal actors in this arrangement that was corroborated by former associate Tony Bobulinski, who feels that the Biden family is compromised. Biden’s foreign policy team headed by Secretary of State Tony Blinken got rolled in a meeting in Alaska with the Chinese. And now, Beijing has decided to conduct military exercises that engulfed Taiwan (via CNN):

China's armed forces conducted simultaneous military exercises to the west and east of Taiwan on Monday in a move analysts said was a warning to the self-ruled island and its supporter, the United States.

The Chinese aircraft carrier Liaoning and its escorts were conducting maneuvers around Taiwan, China's military said in a statement Monday.

"It was a routine training exercise organized according to the annual work plan to test the troops' training effectiveness and beef up their capability to safeguard national sovereignty, security and development interests," the statement said.

Taiwan's Defense Ministry said it had a "full grasp" of the situation and was "appropriately handling" the matter, Reuters reported.

Have we seen a massive lurch towards events that could lead to a massive Sino-American war? Maybe—at the very least there is concern that this latest exercise is a sign that Beijing is accelerating plans for a possible invasion of Taiwan. Oh, and of course, the Chinese would issue a statement like that about this being a routine training exercise (via AP):

The American military is warning that China is probably accelerating its timetable for capturing control of Taiwan, the island democracy that has been the chief source of tension between Washington and Beijing for decades and is widely seen as the most likely trigger for a potentially catastrophic U.S.-China war.

The worry about Taiwan comes as China wields new strength from years of military buildup. It has become more aggressive with Taiwan and more assertive in sovereignty disputes in the South China Sea. Beijing also has become more confrontational with Washington; senior Chinese officials traded sharp and unusually public barbs with Secretary of State Antony Blinken in talks in Alaska last month.

A military move against Taiwan, however, would be a test of U.S. support for the island that Beijing views as a breakaway province. For the Biden administration, it could present the choice of abandoning a friendly, democratic entity or risking what could become an all-out war over a cause that is not on the radar of most Americans. The United States has long pledged to help Taiwan defend itself, but it has deliberately left unclear how far it would go in response to a Chinese attack.

State Department spokesman Ned Price on Wednesday expressed “great concern” at what he called pattern of Chinese efforts to intimidate others in the region, including Taiwan.

“The United States maintains the capacity to resist any resort to force or any other forms of coercion that would jeopardize the security or the social or economic system of the people on Taiwan,” Price said.

The issue is do we trust Biden would even do anything to protect Taiwan or be forceful with China in any meaningful way? No. As of now, Joe is sleepy with the Chinese. They know he’s weak—and he is. Can’t really conduct a solid foreign policy when your opponent knows you’re simply not all there. Also, we all know Joe will probably find out about this today since he sleeps a lot. As for Taiwan, well, they’ve vowed to fight to the death should an invasion occur.