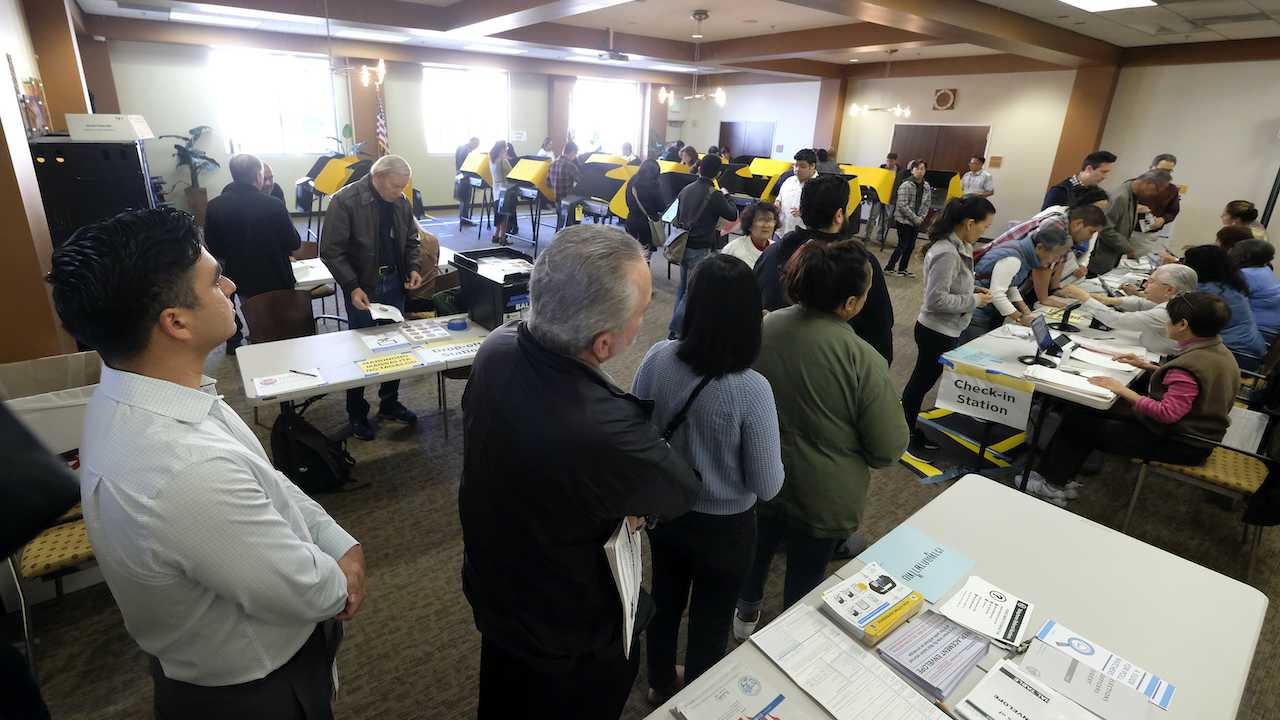 Georgia is back to its Jim Crow days, except it’s not. We’ve seen a lot of noise about the latest voting bill in Georgia. Democrats, the liberal media, and other progressives are livid over it. It contains security mechanisms that combat voter fraud. I know, how awful, right? Voter ID is now required for both in-person voting and mail-in ballots. That’s really the main issue here. That’s it.

The bill doesn’t allow for polling locations to close earlier. President Biden decided to toss that hand grenade into the tent. It’s an outright lie. It’s the Left’s "Big Lie" if you will — and I’m sure there are scores of liberals and reporters who believe it. It’s formed the basis to resurrect a slew of false liberal narratives, especially the "it's easier to buy a gun (or do any activity) than vote."

The legislation, which followed Democratic victories that flipped the state at the presidential and Senate levels, comes amid a national movement among Republican-controlled state legislatures to mount the most extensive contraction of voting access in generations. Seeking to appease a conservative base that remains incensed about the results of the 2020 election, Republicans have already passed a similar law in Iowa, and are moving forward with efforts to restrict voting in states including Arizona, Florida and Texas.

Democrats and voting rights groups have condemned such efforts, arguing that they unfairly target voters of color. They say the new law in Georgia particularly seeks to make voting harder for the state’s large Black population, which was crucial to President Biden’s triumph in Georgia in November and the success of Senators Raphael Warnock and Jon Ossoff in the January runoff elections.

Wait, so how does requiring voter ID restrict voting? It doesn’t. Here’s the dirty secret: the law expands early voting, folks. Now, every now and then, these outlets will actually publish stories that undercut their narrative. It will never see the light of day on the broadcasting side, of course. But they're around, and we can thank CBS News for offering the ammunition. The nine-point listicle about this new law shows that this bill is anything but restrictive. In fact, it's grounded in common sense. Here are some of the provisions:

The law does make significant changes to the way the state will run elections moving forward. It expands early voting access for some Georgia voters, adds an ID requirement for absentee voting, codifies the use of drop boxes with strict rules on how they can be used and sets new rules for state and local election officials.

Nearly 2.7 million Georgians voted early during the 2020 general election and the new law will offer more opportunities for early voting in most of Georgia's counties. There will be at least 17 days of early voting, starting on the Monday that is 22 days before Election Day until the Friday before an election.

ID is now required not just for in-person voting, but also for mail-in voting

Previously in Georgia, a form of identification was required for voting in person but not for voting absentee by mail. The new law requires those requesting and returning ballots by mail to also submit a driver's license number or state ID number. If the voter does not have one, he or she can submit a photocopy of a different form of identification. The county registrar's offices or the Georgia Department of Driver Services can issue free state ID cards. When a voter returns an absentee ballot, he or she can also provide the last four digits of their Social Security number in place of an ID number.

This provision replaces a signature requirement for verifying a person's identification, and it's opposed by voting rights groups who point to some studies that show that voter ID requirements tend to disproportionately affect voters of color. At the same time, incomplete or mismatched signatures have often caused ballots to be rejected. In the June 2020 primary, about 3,200 of 1.1 million mail ballots were rejected for signature issues, according to a CBS News analysis last year. As a result, the ID requirement could help election officials process ballots more efficiently.

While no-excuse absentee voting has been in place in Georgia since 2005, the state didn't authorize the use of secure drop boxes as a way to return ballots until the 2020 election, as a response to the pandemic. The new law mandates at least one drop box per county, but restricts where they may be placed and when they may be accessed.

They must be located inside the clerk's office or inside a voting location and are only going to be accessible during early voting hours, and then closed when the early voting period ends. This is a departure from the 2020 elections, when drop boxes were available 24-7. And there can only be one drop box for every 100,000 voters in a county.

The timeline for requesting and returning ballots has also shortened under the new law. Previously, voters could request a ballot 180 days out from an election. Now they can request them 78 days before an election. Ballot applications must be received by the clerk no later than 11 days prior to the election — earlier than the previous deadline.

This is pretty mainstream. It’s sensible. It’s also bipartisan. Almost everyone across geographic, racial, and political lines supports voter ID laws. This isn’t controversial. If this was Jim Crow, where's the poll tax for nonwhite voters? Where are the literacy tests?

Once again, the historical illiteracy of liberal America and its media allies is explicitly shown. And after all the noise, a mere 36 percent oppose Georgia’s voting law. That's remarkably weak and showcases that the media is indeed still operating under a dense bubble of lies, false narratives, and misinformation. Henry Olson took to the editorial pages of The Washington Post to shred this narrative that Jim Crow lives within this Georgia bill [emphasis mine]:

The new Georgia law does nothing to return the state to this terrible time [Jim Crow]. Black voters will still be able to register without hindrance. And they, like all other Georgians, will be able to vote in many different ways: on Election Day, in-person before Election Day, or by mail without an excuse if they are 65 or older.

Democrats have long resisted the [photo ID] requirement on the theory that some voters without driver’s licenses or other state-issued IDs could be disenfranchised. But as progressive elections analyst Ruy Teixeira points out, studies regularly show that photo ID requirements have not reduced turnout. Georgia’s law also permits voters to ask for a free voter-ID card if they don’t have one of the six permitted forms of photo ID. A recent poll conducted for the Atlanta Journal-Constitution also found that 74 percent of Georgians support a photo-ID requirement for voting, including 63 percent of Black respondents. Democrats’ objections are an answer in search of a problem.

The new mail-in ballot measures are also not likely to depress turnout. Black voters already prefer to vote in person, either early or on Election Day. Seventy percent say they voted in-person in the 2020 presidential election according to the AJC poll. Moreover, the law’s new security measure, which replaces the old system of using a person’s signature to verify absentee ballots with a requirement that absentee voters provide a driver’s license or state ID card, will likely decrease the chance that valid ballots are wrongly rejected. That’s a good thing that everyone should cheer.

No-excuse mail balloting also did not lead to higher voter turnout in 2020. Stanford University researchers examined this question in a recent study and found that turnout increased by roughly the same amount in states that did not allow no-excuse mail voting as in states that did. “Absentee voting doesn’t significantly affect whether people vote or not,” the study’s primary author said. “It mostly changes how they vote. Voter interest is far more important in determining turnout.”

The changes to Sunday early voting will also not likely have any effect. Despite Democratic claims that Georgia’s after-church “souls to the polls” early voting initiatives drove turnout, data from the 2020 presidential election and the Jan. 5 Senate runoffs showed that Sundays were the least popular days to vote in both races. In the runoff, more than 174,000 people voted on each weekday of early voting, but only 31,000 people voted on Sunday, Dec. 20, and only about 20,000 voted the following Sunday. Sundays were also the lightest voting day of the week in the November presidential election as well. Georgia’s new law also mandates an extra Saturday of early voting and allows counties the option of allowing early voting on Sundays. Voting experts say the bill expands early voting access, the opposite of Democratic claims.

Well, that pretty much kills the Jim Crow narrative, huh? Nothing in the bill is going to impact any aspect of voting in the Peach State. Nothing. At the end of the day, this bill expands early voting days, which I thought was something Democrats loved.

Just a mere comb over the text and there is no whiff of anything nefarious. If there is no Ku Klux Klan, no literacy tests, and no poll taxes, then the Jim Crow comparison fails. The voter ID talking points are laughably dry and debunked. Even progressive election analysts have torched the notion that voter ID requirements impact nonwhite voters negatively. Hell, they support these measures. Yet, the liberal media is a monster. It’s an enemy of the people and the hard-working families in Georgia are going to feel the brunt of the destruction they're inflicting on the state. Major League Baseball decided to cater to the woke crowd and moved the MLB draft and All-Star Game out of the state based on the pack of lies fed to them by this Democrat-media complex. It will cost the state $100 million in economic activity. These are bad people, with bad intentions, who hate normal working folks because they’re not left-wing ideological psychos. The true irony is that the location of the MLB All-Star Game is Denver, Colorado, a state that has voter ID laws.

You simply cannot make this up.

Side Note: Don't forget to read our friend Brad Slager, who did a line-by-line dissection of The New York Times' coverage of this law.