The Two Words That Best Describe the Biden Administration...And It's Not Good 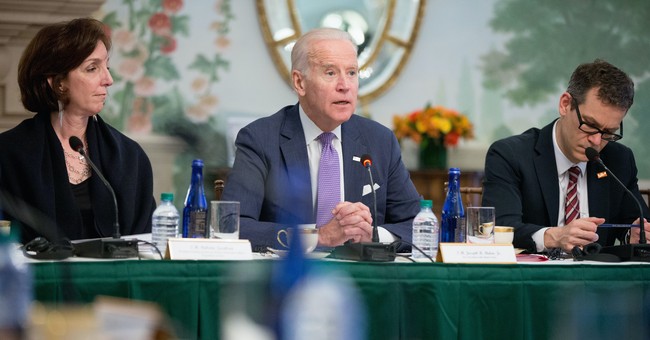 There is nothing Joe Biden is doing that Donald Trump hadn’t already outlined. That’s a fact. The Biden COVID agenda is the Trump plan, which is the dirty secret about this whole circus surrounding the pandemic. Biden’s biggest promise during the 2020 election is that if elected, COVID will go away and schools would reopen. Well, the teachers’ unions decided to nix that, so all we have left is the vaccination plan which is a Trump initiative. The vaccine is a Trump initiative. It’s probably the 45th president’s greatest domestic achievement. It’s certainly one for the country—and Biden has zero to do with it. The vaccine is why we’re on track to get back to normal.

You can’t say the $1.9 trillion liberal pork bill is COVID relief. We spent hundreds of millions on nonsense items, like Native American languages. Oh, and Biden couldn’t even keep the promise of $2,000 checks but was able to bomb Syria. Why no rush? Why is there no different agenda for COVID? Why is there no urgency in helping American families struggling under the COVID lockdowns? Well, have you looked at his administration? It’s all rich people. It’s folks who can telework. Folks who have hordes of cash and not have a bother in the world. It must be nice. The two words that can describe this administration: limousine liberal. It’s reeks of it. Scores of former Obama officials are back into the fold and richer than ever as well (via ABC News):

Rice, who is among the wealthiest members of the Biden White House team, dramatically increased her wealth since her previous White House job during the Obama administration, reporting between $36 million and $149 million in various assets in her new disclosure filing released Saturday morning.

That's nearly three to four times the amount she reported back in 2009, when she joined the Obama administration as the ambassador to the United Nations. Back then she reported total wealth between $13.6 million and $40.4 million, and the figure didn't increase dramatically when she served as President Barack Obama's national security advisor during his second term.

Zients is the single wealthiest Biden administration official that had disclosed assets as of Saturday evening, surpassing Vanita Gupta, Biden's nominees for associate attorney general, in his total assets. The White House has not yet released all of the disclosures requested by ABC News.

Zients reported owning between $89.3 million and $442.8 million in assets, including various investment funds, real estate properties and cash shares. He has divested his shares in his private investment firm, Cranemere Group, as well as $1 million worth of shares in Facebook, where he has served as a board member.

He reported making between $10.4 million and $28 million in income in the past year, including his seven-figure salary from his investment firm, as well as other several seven-figure assets he has divested from.

His total wealth has more than doubled since he first joined the Obama White House as the deputy director of the Office of Management and Budget in 2009, when he reported assets between $45.2 million and $205.7 million.

In her disclosure report, White House Press Secretary Jen Psaki reported receiving a communications consulting fee from Zients in excess of $5,000 -- though the report has no further details on the transaction. Her assets have also grown significantly since her first White House job during the Obama administration. In 2009, Psaki had reported between $32,000 and $130,000 in assets and $125,000 in income, but in 2021 she reported her wealth had increased at least tenfold, to up to $1.5 million in assets with an annual income of roughly $647,742.

It must be nice. That’s all I’ll say—and folks wonder why there’s such a detachment between DC, in general, and the rest of the country. Why working-class voters are leaving the Democratic Party in droves. They can’t relate to a lot of these people. They don’t know them. The backbone of the Democratic Party has atrophied due to the increasing urbanization of the party base. The professional Left is now dominant, and the coasts and the cities are now where a majority of the people live. Democrats say they’re for the working class. They’re not. They’re not even given them a full-throated COVID relief bill. A simple $2,000 check promise couldn’t be kept. And they’re obsessed with raising the minimum wage which will kill any chance of a host of pre-COVID jobs coming back. Over a million jobs will be lost if liberals could have their way. Is that ‘building back better'?

Say what you will about Trump, he cut taxes, regulations, and led to millions of jobs being created. Bonuses were handed out to workers. Small business and consumer confidence were also sky-high. Biden’s buy American executive order…is a Trump priority. If Biden truly wants to differentiate himself from Trump, he will call for the reopening of America. He won’t do it, but that’s the best relief package he can give to American workers.