So, You Want to Know How Ted Cruz's Wife Is Handling Her Texts Being Leaked? Hint: Not Well 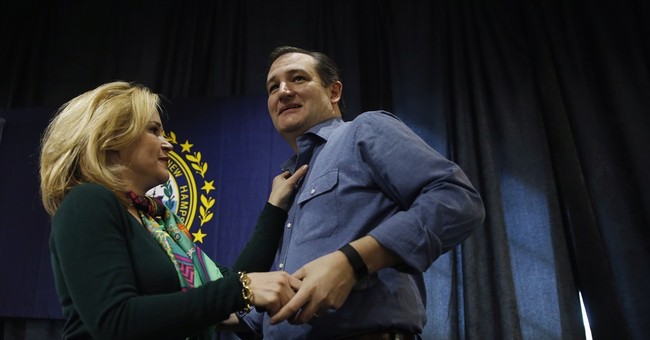 The liberal media thinks Sen. Ted Cruz’s Cancun getaway is some massive scandal on par with Watergate. It’s not. The Texas Republican absconded for a brief time with his family to Mexico in the aftermath of a brutal winter storm that left millions without power. It’s a public relations issue. It’s bad optics all-around. It’s not unsurvivable thought. To make things even more ridiculous, Heidi Cruz’s texts about this trip were leaked to The New York Times. What damning information could be gleaned from this? Oh, nothing other than Mrs. Cruz inviting whoever wants to come to Cancun with them. How awful. Sen. Cruz recently detailed his wife’s reaction to her communications being leaked to the press. Spoiler alert: she’s pissed (via NY Post):

The Texas GOPer addressed his PR nightmare of a trip to Mexico on the podcast “Ruthless,” which aired Tuesday.

“I will say Heidi’s pretty pissed at that,” Cruz said about the group text where his better half asked friends to flee to Cancun with them amid the “FREEZING” temps.

Cruz noted that he has a mix of Republican and Democrat neighbors in his exclusive River Oaks neighborhood in Houston — and said the leak was a sign of “how ridiculously politicized and nasty” people can get.

“Here’s a suggestion: just don’t be a–holes,” he continued. “Like, just, you know, treat each other as human beings have some degree, some modicum of respect.”

Well, again, poor judgment was exhibited here. Democrats cannot be trusted and if you’re Ted Cruz, you should assume that every liberal in America hates your guts. He should because they do. Again, this isn’t a political scandal. I doubt this will impact his re-election chances, which are far off into the future. This will be forgotten, and Cruz can do a lot between now and then to make this a non-issue. And let’s not forget that this was hyped up around the time when it seemed clear that the so-called COVID relief bill, which is priced at $1.9 trillion, doesn’t have that much money going towards relief. Oh, and there was that thing with Andrew Cuomo cooking the books on the real COVID death toll and harassing state lawmakers who are criticizing this alleged cover-up. Also, Cuomo has been slapped with a new sexual assault/harassment allegation as well.

The lesson here for the Cruz family is that you’re one of the faces of the party. You’re recognizable. You’re hated by the Left—and maybe including Democrats in group texts should probably not be standard procedure anymore.