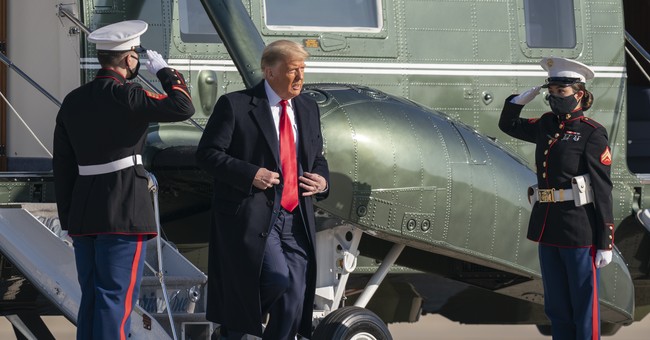 They just cannot let him go. They can’t. The liberal media remains addicted to Donald Trump like crack cocaine, and there’s nothing to suggest that this will subside. The 2020 election is long over. Joe Biden is now president—but they cannot let this guy ride into the sunset. Trump is now banned on Facebook and Twitter so maybe more reporters are more willing to write Trump-based stories, but this is moot now. Trump is no longer president, but for some folks at CNN especially, they can’t let him go. It’s getting creepy. They had a slip-up that was rather unfortunate about the Trump impeachment trial. And now, CNN’s Jim Acosta just had to let us know that Trump went golfing yesterday.

Trump was out playing golf today at his West Palm Beach golf course... per our photog @petermorrisCNN

Trump is a private citizen. He’s no longer president. He’s in Florida. Yeah, why not go golfing. it piggybacks on another Trump story The New York Times doled out about how he was sicker than originally reported when he contracted COVID last year:

President Donald J. Trump was sicker with Covid-19 in October than publicly acknowledged at the time, with extremely depressed blood oxygen levels at one point and a lung problem associated with pneumonia caused by the coronavirus, according to four people familiar with his condition.

His prognosis became so worrisome before he was taken to Walter Reed National Military Medical Center that officials believed he would need to be put on a ventilator, two of the people familiar with his condition said.

The people familiar with Mr. Trump’s health said he was found to have lung infiltrates, which occur when the lungs are inflamed and contain substances such as fluid or bacteria. Their presence, especially when a patient is exhibiting other symptoms, can be a sign of an acute case of the disease. They can be easily spotted on an X-ray or scan, when parts of the lungs appear opaque, or white.

Okay, well, first it’s not the low 90s. The red flag figure my doctor told me when I contracted COVID regarding oxygen levels was 88 percent. That’s obviously not low 90s, right? But more to the point, who are these four people. The number of times articles were retracted or debunked because the opposition press decided to run with unflattering Trump stories based on the anecdotes of random people are too numerous to count. Let’s say this happened. Why should we care…now? He survived. He’s no longer president. Also, whether it be a Democrat or a Republican—I could see staffers trying to scrub as much as possible to avoid markets crashing.

Trump is long gone, but these liberal journalists still injecting the Donald into their veins.

You guys miss him. just admit it. He may have insulted you, but he always answered your questions, no matter how ridiculous. He was around. His Twitter account provided 24-hour access to the 45th president. With Biden, well, he has to take a nap by 3 pm and then disappears.