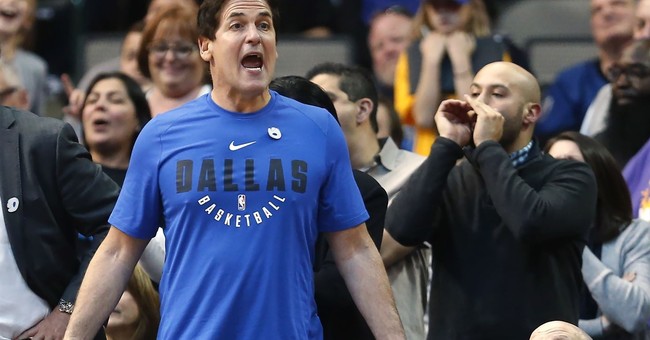 Beth covered this last night. Dallas Mavericks owner and billionaire entrepreneur Mark Cuban declared that the Star-Spangled Banner would no longer be played before home games. Yeah, that’s sure to play well in deep-red Texas. Some noted that if you are mulling a run for president, which Cuban has done, banning the national anthem is probably not the best move. Then again, maybe he isn’t serious about being president at all. These are billionaires. They have money and time on their hands and just toss stuff into the wind for the news cycle. Well, I was expecting the National Basketball Association to be fine with this, but alas — it's not. It's mandating the national anthem be played before all games (via Fox News):

The NBA is requiring that all teams play the national anthem before games "in keeping with longstanding league policy," just one day after Dallas Mavericks owner Mark Cuban told The Athletic the team decided not to play it at home games.

NBA Chief Communications Officer Mike Bass released a statement on Wednesday, just a day after Cuban said he had no plans to play the national anthem at any future home games.

"With NBA teams now in the process of welcoming back fans into their arenas, all teams will play the national anthem in keeping with longstanding league policy," Bass said.

Cuban is not fighting it.

“We’re good with it,” he responded. They're set to restart playing the Star-Spangled Banner tonight.

The NBA has issued a statement regarding the league's rule on the national anthem.

Mavs owner @mcuban decided before the season that the Mavericks would no longer play the anthem, and it hasn't been played before any of the team's 13 home games. pic.twitter.com/qmDquo1g0e

"The hope is that those who feel passionate about the anthem being played will be just as passionate in listening to those who do not feel it represents them.” https://t.co/QA8RfAENQB

Hey, the NBA made the right call for once. But it's still owned by China.