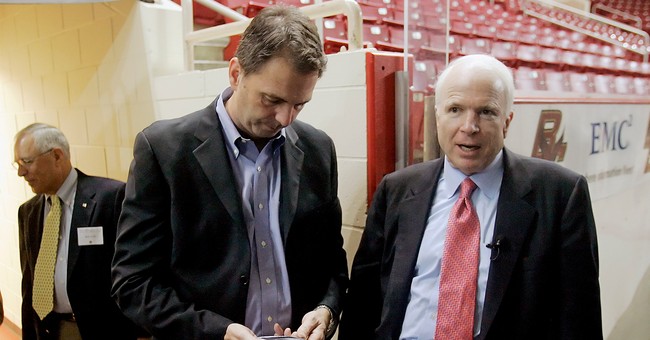 John Weaver is a co-founder of the anti-Trump Lincoln Project. He’s also been accused of some serious allegations of sexual misconduct. Writer Ryan Girdusky tweeted about these allegations, while others outright named Weaver as the person who allegedly “groomed young men” and offered them jobs in exchange for sex. People are coming out of the woodwork. Axios’ reporter Lachlan Markay has also touched upon this story as well. Fox News’ Laura Ingraham has a segment on it.

Again, for now, these are allegations. We’ll see what happens next, but The Lincoln Project appears to have scrubbed its website of Weaver (via Daily Caller):

The Lincoln Project appeared to have scrubbed association with its co-founder John Weaver on its site after allegations that Weaver sent unwanted, uncomfortable and sexually suggestive messages to nearly a dozen young men.

A search of The Lincoln Project’s “Our Team” page, where Weaver was listed, leads to a page that doesn’t exist. An archive of the page shows that it existed as of January 11, and listed Weaver. Two days prior, journalist Ryan Girdusky said in a tweet that young men had sent him screenshots of predatory messages allegedly from Weaver, a political consultant who formerly worked for the John McCain presidential campaigns and then on former Ohio Gov. John Kasich’s presidential campaign.

Wow, @projectlincoln has quietly deleted @jwgop from their website after Laura Ingraham reported on allegations against Weaver involving dozens of young men

Screenshots of the pages that were taken down https://t.co/5aDfEg0SuShttps://t.co/AoX9AGHAWd pic.twitter.com/X7qwM6Tt5x

That’s usually not a good sign. During the 2020 election, Weaver was cited as an example of the group’s lack of self-awareness and appalling self-righteousness when they tweeted last July that they chose country over party. Weaver was recently registered as a foreign agent of Russia.

UPDATE: Weaver issued a statement admitting to the allegations that he sent multiple men inappropriate messages (via Axios):

To the men I made uncomfortable through my messages that I viewed as consensual mutual conversations at the time: I am truly sorry. They were inappropriate and it was because of my failings that this discomfort was brought on you,” Weaver said “The truth is that I'm gay,” he added.

“And that I have a wife and two kids who I love. My inability to reconcile those two truths has led to this agonizing place.”

"I am truly sorry. They were inappropriate and it was because of my failings that this discomfort was brought on you."https://t.co/c3qkQJAY1I