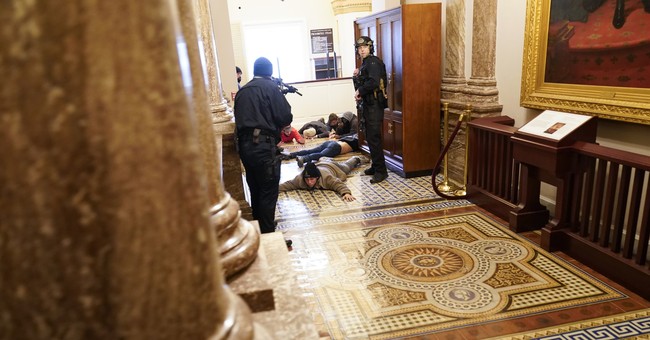 There are many questions from yesterday. Why was it so easy for demonstrators to storm the Capitol? Was the city prepared? Regardless, the fact is that while Congress was debating certifying the 2020 Electoral College results, senators and representatives had to recess and flee to safety as Trump supporters broke into the building. Guns were drawn inside the House chamber as police barricaded the door to prevent protesters from coming inside. The Senate floor was breached. Inside the building, tear gas was deployed and a rumble between police and protesters broke out in the Rotunda. Also, a woman was shot and killed. The footage is graphic, but you can watch it here [WARNING: Graphic content].

It clearly shows a police officer shoot the woman who is trying to bust down the door, but as Ben Domenech of The Federalist noted, "This is crazy. There were other cops right behind her.

Was there an attempt at an arrest? I also understand that this is one of those situations where you could potentially be shot by police. We'll let the investigation carry out as always with an officer-involved shooting, but I'm sure more questions will be raised before we get any answers. Also, Twitter is not the place to debate or argue this event at all. Dan Cohen of Behind the Headlines had the clip, by the way.

I believe at that point they had already evacuated, but it's clear he shot an unarmed trespasser who literally had other cops at her back without even trying to make an arrest.

What we do know is that the woman was named Ashli Babbitt, a Trump supporter, and Air Force veteran. She served for 14 years. Her family found out about her death through the news (via NY POST):

The President Trump supporter killed in the Capitol building Wednesday was an Air Force vet from California who tweeted a day earlier how “nothing will stop us” and “the storm is here.”

Ashli Babbitt, who had 14 years in the service and did four tours of duty, was married and lived near San Diego, her husband Aaron told KUSI-TV.

“I’m numb. I’m devastated. Nobody from DC notified my son and we found out on TV,” the husband’s mother, Robin Babbitt, told The Post, saying of her daughter-in-law, “She is a Trump supporter.”

Everything is “pretty surreal,” added Aaron’s brother, Justin. “It’s hard, because we haven’t been officially notified.”

Some of her family, her mother-in-law especially, were puzzled as to why she decided to go to DC. Her husband reportedly did not go. Trump supporters descended on the capital for the Save America rally which was addressed by President Trump yesterday.