That's Not the Real Santa: Boy Cries After St. Nick Tells Him No Nerf Guns For Christmas 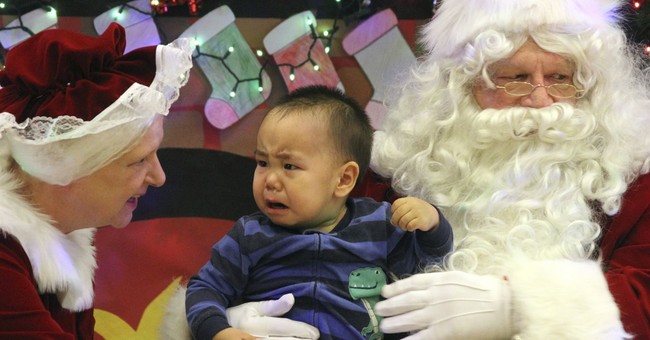 In the words of Buddy, “you sit on a throne of lies.” Who the hell is this fake Santa? Whoever this person is he deserved to be beaten, tarred, feathered and then set on fire. Okay, maybe that’s a bit much, but if this is Santa—he deserves to be shot out of the sky along with all his reindeer.

In all seriousness, it takes a lot to screw up as a mall Santa. It’s not the most pleasant work, you need to have a lot of patience, but making a kid cry because you want to peddle some Moms Demand gun control nonsense is a special kind of idiocy. What are you doing, Saint Nick? If you’re going to do this, at least take a page from Billy Bob Thornton’s book and be drunk, vulgar, and a total degenerate. Yeah, in Illinois, some boy wanted a Nerf gun for Christmas. This idiot Santa said no (via The Hill):

A mall in Chicago has apologized and delivered a surprise to a young boy who was told by a mall Santa Claus that he could not have a toy gun for Christmas.

Video posted by the boy's mother on Facebook shows Michael asking a Santa at the Harlem Irving Plaza Mall for a nerf gun.

The boy eventually breaks into tears.

"My poor baby. This was the first year Michael was excited to go see Santa. It was supposed to be magical but instead I had to watch my sweet little boy fight back tears because Santa told him No because of his own personal beliefs," the boy's mother wrote in her Facebook post.

"I had to think fast and explain to him that this Santa was just a helper and not the real guy. I just wanted to console my baby and get him out of there, flipping out on Santa would have only made it worse," she added.

Good on the mall for apologizing and giving the kid the gift, he wanted. I actually bought my nephew a few Nerf guns for Christmas and they’re pretty cool looking. For starters, when I was growing up, the darts were never stored in a magazine. They look pretty cool. Of course, kids want Nerf guns.

This isn’t some oddity, Santa. It’s why the company is still around, you moron. There were many, many ways to handle this differently and you screwed up a kid’s spirit over the holidays.