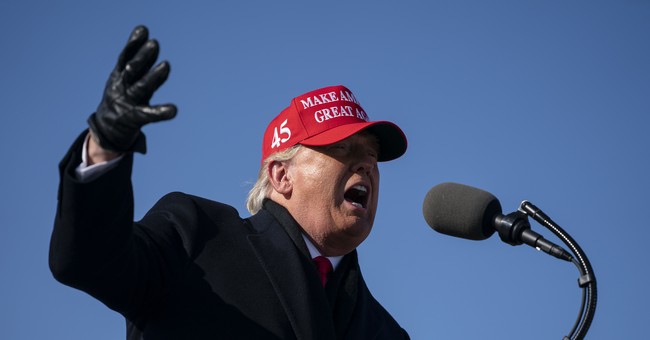 President Trump has been running the gauntlet on rallies in key states. He just wrapped his rally in Opa-Locka and its location does say a lot about how his team feels about taking the Sunshine State. Campaigning in the state usually zeroes in on the I-4 Corridor. That’s where you’d think Trump would host this rally one day before we all go to the polls. Nope. He’s doing in Miami-Dade County, where Joe Biden has not been doing so hot. Sure, he’ll win the county, but as of now, don’t expect him to carry margins that would suggest the state is going to flip. Hillary Clinton carried this county, the most populous Democratic county in the state, by 26 points in 2016—and she still lost. The location of this rally and its related election tea leaves didn't go unnoticed, especially from folks like David Chapman. Chapman has gone on a series of threads explaining why Trump is favored to win tomorrow, notably citing, among other things, how the candidate who has held the enthusiasm edge has won every election since 1988.

Trump's final Florida stop is Miami-Dade County, not the I-4 corridor (middle of state).

The I-4 corridor is where the state is won. Miami-Dade is a democrat stronghold.

What does it tell you that Trump's final Florida stop is in a Democrat stronghold?

Larry Schweikart, among others, has been tracking the early vote totals, which usually break heavily for Democrats. Well, in Florida, that lead has collapsed…big league. The lead is under 100k right now. GOP is jacked up and ready to vote. And if Trump clinches Florida, Biden’s chances of winning this race drop as well. This rally also comes after a flurry of polls showing Electoral College carnage for the Biden team come Election Day…maybe.

HUGE turnout for @realDonaldTrump in Georgia and Florida!

The enthusiasm is incredible!

Even @CBS is in full CYA mode! pic.twitter.com/boogeEf3Bu

All I can say now to you, fellow MAGA supporters is get out and vote. For extra credit, find someone else who supports Trump and take them to the polls as well.