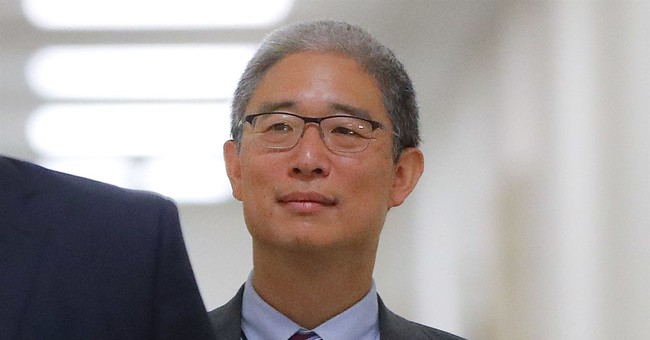 There was election meddling in 2016, but the most damaging came from the J. Edgar Hoover Building. The FBI spied on the Trump campaign through Crossfire Hurricane, whose authorization forms were a trainwreck and devoid of any evidence that would warrant such an operation. Carter Page, a former Trump campaign official, was under a FISA spy warrant. All of this because a Clinton-funded piece of opposition research, the Trump dossier, compiled by ex-MI6 spook Christopher Steele who was contracted by Fusion GPS, a research firm, was weaponized by the Obama Department of Justice.

Bruce Ohr, a former top official at the DOJ, had contact with Steele and didn’t disclose it. Even after Steele’s work was exposed as biased garbage and was fired by the FBU for “unauthorized media contacts,” he still had contact with him. Oh, and his wife worked for Fusion GPS. He was demoted, but kept his job. Yeah, after all of that, he was still collecting a paycheck. Well, he’s gone now (via Fox News):

Bruce Ohr, a Justice Department official demoted in 2017 following the revelation of his meetings with anti-Trump dossier figure Christopher Steele, retired in late September while awaiting a "final decision on a disciplinary review," a department spokeswoman told Fox News on Wednesday.

Fox News first reported that Ohr was demoted from his senior position at the Justice Department following the revelation of his meetings with ex-British intelligence officer Christopher Steele, of which his superiors at the DOJ were unaware.

Ohr was a key contact inside the Justice Department for Steele, who authored an anti-Trump dossier for research firm Fusion GPS as opposition research for Hillary Clinton's 2016 campaign. Ohr's wife, Nellie Ohr, worked for Fusion GPS at the time.

That dossier, which remains unverified, was instrumental in obtaining the FISA warrant for former Trump campaign adviser Carter Page, according to a report from Justice Department Inspector General Michael Horowitz.

SCOOP: A person familiar with the matter tells @CBSNews that Bruce Ohr is no longer working at DOJ. He resigned the day before he was going to be terminated by DOJ over his conduct cited in IG Horowitz report. Ohr was faulted for becoming a kind of backchannel linking dossier

author Christopher Steele to the FBI after Steele's termination by Bureau as a source. Timing: Ohr left DOJ in recent weeks + seeking his comment

...being conducted by Department senior career officials was imminent."