Laugh or Cry: That's the Key Observation a Vox Writer Had About Trump and Obama...Is This a Joke? 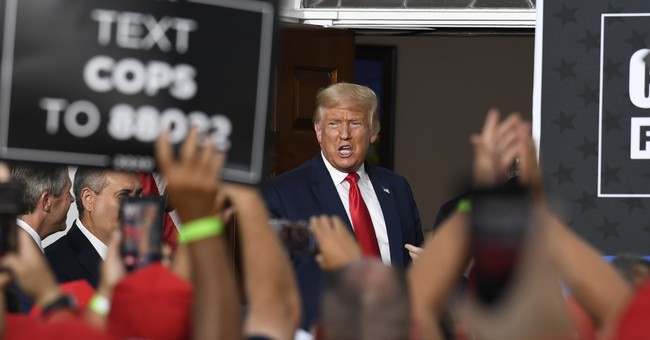 There are some people who just can’t deal with Donald Trump being president of the United States. The entire Democratic Party has been engulfed in this derangement syndrome; Hillary Clinton is one of the most visible and high-profile faces. Yet, Vox reporter Ian Milhiser, formerly of the now-dead Think Progress, takes it to a whole other level. I mean, the man had a total meltdown over Neil Gorsuch’s Supreme Court nomination, so it’s par for the course.

One important difference between Obama and Trump is that Obama won two presidential elections and Trump won zero.

This is an incredible dorky thing, but I just found a copy of John Roberts' 1981 memo arguing against restoring Section 2 of the Voting Rights Act, and I'm irrationally excited about this fact.

Yeah, this is not even worth getting all huffy about. It wouldn’t shock me if this was done to get conservatives on Twitter to respond; the ratio to this tweet is…something. There will always be folks like this—and there's not much you can do for them. Ian can peddle nonsense the same way Mazie Hirono and Maxine Waters do from the dais.

From the Electoral College to the Russian collusion myth, liberals have taken to wearing the tinfoil hat to justify their emotions over Trump and their shocking and devastating loss in 2016. There have been now at least three reports, Senate intelligence, Department of Justice Inspector General, and the Mueller report that have either outright said there was no conspiracy between the Trump team and the Kremlin to tilt the 2016 election or shredded the credibility of the document that started this whole circus act: the Democrat-funded Trump dossier. It’s an opposite research project that was unverified but used as the basis to secure spy warrants against Carter Page, a former Trump campaign official, and the campaign itself. Heck, the FBI even set up fake briefings to glean information from Trump about Russia.

As for the Electoral College aspect, what can I say, we’ve had four other presidents who won the Electoral College but lost the popular vote—and we’re still here. Rutherford B. Hayes, John Quincy Adams, Benjamin Harrison, and George Bush did not foster the end of our constitutional republic—and neither will Trump. Get over it. We’re a nation that values geographic diversity in its candidates. That’s how you get to 270. Democrats doubling down on the areas that are already uncompetitive in national elections isn’t going to be successful to clinching that benchmark. We all know California is going blue. We all know it’s 55 electoral votes are going to Joe Biden. Why even care about maximizing turnout there? You have to win states, Democrats. And the Rust Belt really doesn’t take too kindly to you calling them country bumpkins or racists for, you know, supporting America. Law enforcement isn’t a branch of the secret police. It’s actually one of the few jobs left where those without college degrees can earn a decent salary and benefits.

Yes, Democrats you still need white working-class whites to win, which was a backbone of your party in years past and that of the Obama coalition—but that got buried after the 2016 exits polls were released.

Trump is president. You can certainly think otherwise. That’s your right. You have a right to be totally and utterly irrational, yes.