With Bill Clinton and Cory Booker, Democrats Give Me Too the Middle Finger During Convention 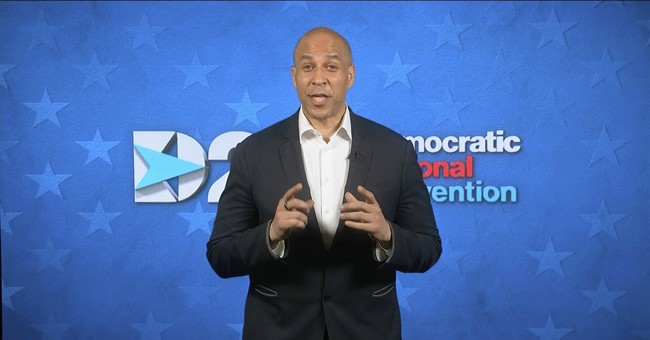 It’s night four of the Democratic National Convention. It’s the final night. Thank God because…I’ve practically drunk all of my bourbon to get through this week. Sen. Cory Booker (D-NJ) decided to harp on the old ‘Democrats are for the working man’ bit. He said he was speaking because his family rose out of poverty due to a union job. Booker says that Biden knows the dignity of working people. The New Jersey Democrat also said he’s worried that the wealth gap is growing.

Time is limited, so he quickly blamed Trump for failing the country, as 40 million Americans are now at risk of losing their homes, thanks to draconian COVID lockdown procedures. Tens of millions are still hungry, which has been a regrettable but pre-Trump societal issue. Booker says that he still believes in the dream of our ancestors for this country, while erroneously saying that raising the minimum wage is a gateway out of poverty. It’s not. It’s a sure-fire way to cut workers’ hours, kill jobs, close businesses, and accelerate the trend towards automation. Just look at Seattle. Booker said the Democrats and Biden will fight for those who keep us healthy, who teach our kids, who pack, harvest, and cook and clean. Yeah, okay, man. That’s just not true. The Democratic Party is one of limousine liberals. That’s why the working class voted for Trump. They’re sick of you. The Democrats are the party of Hollywood, Wall Street, and the rich. Yeah, you read that right. The Democratic Party is a regional party that is contained to the coasts and the cities, where the professional elite dominate. These people don’t know farmers. They’ve probably never been outdoors. They’re the Tesla crowd, the folks who can afford to dole out tens of thousands of dollars to solar panel their house. Most Americans can’t afford that. But let’s forget how inauthentic Booker’s speech was concerning the core of the Democratic Party.

In the Me Too era, it seems a bit off-putting to say the least that Bill Clinton, who has been credibly accused of rape, to have a prime speaking spot. Also, Cory Booker who admitted to groping his high school friend without consent. Folks, he wrote about it in his college newspaper back in 1992:

New Year's Eve 1984 I will never forget. I was 15. As the ball dropped, I leaned over to hug a friend and she met me instead with an overwhelming kiss. As we fumbled upon the bed, I remember debating my next 'move' as if it were a chess game. With the 'Top Gun' slogan ringing in my head, I slowly reached for her breast. After having my hand pushed away once, I reached my 'mark.'

"Our groping ended soon and while no 'relationship' ensued, a friendship did. You see, the next week in school she told me that she was drunk that night and didn't really know what she was doing."

Look, these are the Left’s rules. He’s an abuser of women. That’s the Democrats’ rule. But, of course, you can’t cancel Booker, but it is a rather telling sign about how the Left polices their own. You all know this by now. The Democrats live by separate rules whilst being protected by their media allies. It still doesn’t negate the fact that having Booker and Clinton speak is a big middle finger to the Me Too movement, which I was told liberal Democrats took very, very seriously…until it was discovered that liberal men were some of its worst offenders.