Oh, So a School District's Stance on Re-Opening in the Fall Is Grounded in County-Level Support of Trump 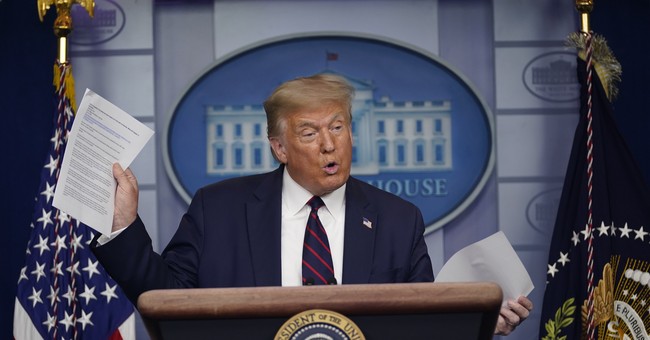 The panic porn over coronavirus has spilled into the school debate. Districts are neck-deep in debate as to whether they should re-open, despite the fact that young children aren’t really impacted by this virus. The reaction has been overblown. In fact, there’s more data that suggests the lockdowns we were subjected to did more harm than good. And now, we have the doomsday peddlers saying our kids shouldn’t learn for another year. Okay—they’re not really saying that, but this online instruction model isn’t going to work. Some places have zero accountability measures, teachers are complaining about how many hours they have to teach, and they also don’t want to go back. We have concerned parents, lazy teachers’ unions, and Trump derangement syndrome overloading the scene here. The data is quite clear. It’s safe for kids to return to school (via WSJ):

The evidence—scientific, health and economic—argues overwhelmingly for schools to open in the fall. Start with the relative immunity of young children to the disease, which should reassure parents.

According to the Centers for Disease Control and Prevention, 30 children under age 15 have died from Covid-19. In a typical year 190 children die of the flu, 436 from suicide, 625 from homicide, and 4,114 from unintentional deaths such as drowning.

Children so far have been shielded from the virus compared to working adults. But even pediatric cancer patients at New York’s Memorial Sloan Kettering were about a third less likely to test positive than their adult care-givers, and only one of 20 who tested positive required noncritical hospital care. In Sweden, which kept schools open, only 20 children under age 19—0.6% of confirmed cases—have been admitted to the ICU and only one has died.

Parents and teachers understandably worry that children might spread the virus. But a recent retrospective study of schools in Northern France, from February before lockdowns, found that “despite three introductions of the virus into three primary schools, there appears to have been no further transmission of the virus to other pupils or teaching and non-teaching staff of the schools.”

Teens appear to be more infectious. Yet schools that have reopened in most countries, including Germany, Singapore, Norway, Denmark and Finland, haven’t experienced outbreaks. Some schools in Israel had outbreaks last month after class sizes were increased, but most infections in both teachers and students were mild.

There was a study from South Korea that The New York Times peddled in an attempt to derail the ‘reopen the schools’ narrative. Don’t bother reading it. It was trash, described as “fairly murky and confused” by Professor Francois Balloux. What do pediatricians say? Send the kids back to the classroom.

“Yes.”
“Absolutely.”
“Without a hesitation.”
“I have no concerns…”
@realDonaldTrump is right: We can safely send kids back to school! pic.twitter.com/e3q5LxcA35

But in this case, the medical experts are being ignored because Democrats really want to drive this COVID panic home by spreading it to parents and their school districts. They want chaos. They want the suburbs to be in play and what better way to do that than frame Trump as someone who wants to get their kids killed. Kids don’t really get it, and the jury is still out as to whether they spread it. What is clear is that the county-level support of Trump is what’s really driving the decisions of the local school boards. Jon Valant of Brookings crunched the numbers (via Brookings):

One simply can't overstate what a huge role Trump and DeVos coming out hard for reopening played in turning a lot of blue districts against it.

…an EdWeek database of school district reopening plans, which, as of July 27, represented about 13 million students in 256 districts (excluding districts with plans coded as “Undecided,” and Puerto Rico, which does not participate in U.S. presidential elections). Since school district boundaries are not coterminous with county boundaries in some states, I used data from the U.S. Department of Education to identify the districts’ primary county location. I then merged data from the MIT Election Data + Science Lab with county-level results from the 2016 presidential election and data from USAFacts showing the number of new COVID-19 cases by county from July 1 to July 25. The idea is to see what is more related to these district decisions (albeit not necessarily causally)—local health conditions or politics.

In reality, there is no relationship—visually or statistically—between school districts’ reopening decisions and their county’s new COVID-19 cases per capita. In contrast, there is a strong relationship—visually and statistically—between districts’ reopening decisions and the county-level support for Trump in the 2016 election. Districts located in counties that supported Trump are much more likely to have announced plans to open in person. On average, districts that have announced plans to reopen in person are located in counties in which 55% voted for Trump in 2016, compared to 35% in districts that have announced plans for remote learning only. Unsurprisingly, the one remaining group in EdWeek’s data—“Hybrid/Partial”—falls right in the middle, at 44%.

These data aren’t perfect. For example, EdWeek’s database of district reopening plans is, by its own acknowledgement, incomplete, and school districts don’t map perfectly to counties. However, the patterns are so clear, and the regression results so consistent (e.g., controlling for different variables and restricting the timeframe of district announcements), that it seems implausible that politics aren’t a major factor in district decision-making.

It’s no shocker, I know. But spare me the public health aspect people are making about schools reopening. Trump wants kids back in school, so liberals oppose it. If he said kids should hang back this fall, liberals would demand schools reopen. It’s so predictable. And the fact that the Left now ignores the experts regarding coronavirus, safety, and schools shows what this whole fiasco was really about: power.

I’m not saying that COVID is fake or not contagious. It’s all of those things, but I’m pretty sure that we all overreacted and the impact of kids not learning for a year will do more damage than coronavirus could ever inflict.

And let the word go forth now: kids are now acceptable chips to put into play for political games. The Left has once again set a truly remarkable precedent.