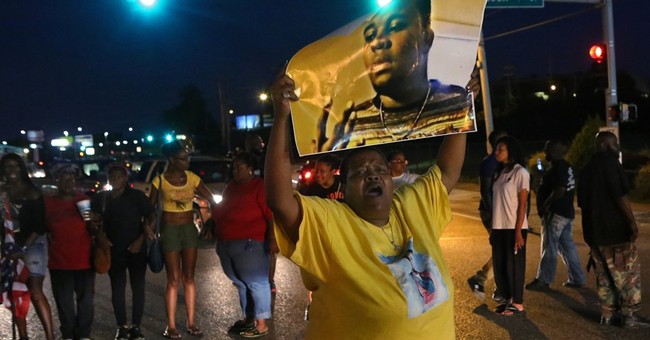 Sorry, if I missed the initial announcement, but the shooting death of Michael Brown by former Ferguson Police Officer Darren Wilson, which was ruled justifiable by the Obama Department of Justice, won’t be charged after the incident was re-investigated. Brown was shot and killed by Wilson on August 9, 2014, after he reached for the former officer’s service weapon. It led to the fantastic lie of “hands up, don’t shoot.”  That Brown had done so prior to him being shot by Wilson. The DOJ report at the time eviscerates that myth, noting that the folks who peddled that claim to the media actually didn’t see the shooting when it occurred. The Obama DOJ did not file civil rights charges against Wilson either.

Apparently, Mr. Wilson knew this re-review could be a possibility since St. Louis County Prosecutor Wesley Bell made it one of his campaign issues. This story is over folks. Done. Wilson did nothing wrong. He acted within the guidelines and he didn’t violate Brown’s civil rights. This was closed years ago, but thanks for re-confirming what we already knew, I guess (via NYT):

Six years after a white police officer shot and killed Michael Brown, a Black teenager, in Ferguson, Mo., another investigation into the killing has come to the same conclusion as the first: The officer should not be charged.

The officer, Darren Wilson, already had been cleared by a grand jury and a federal investigation months after the shooting in 2014. But Thursday’s announcement by a new prosecutor, Wesley Bell, most likely marks the end of the legal saga in a case that started the global rise of the Black Lives Matter movement, which has led to some major shifts in American policing and forced a renewed conversation about racism.

“Although this case represents one of the most significant moments in St. Louis’s history, the question for this office was a simple one: Could we prove beyond a reasonable doubt that when Darren Wilson shot Michael Brown he committed murder or manslaughter under Missouri law?” Mr. Bell said. “After an independent and in-depth review of the evidence, we cannot prove that he did.”

Mr. Bell said that although his office could not prove that a crime was committed, the investigation did not exonerate Mr. Wilson, who resigned months after the shooting. “There are so many points at which Darren Wilson could have handled the situation differently, and if he had, Michael Brown might still be alive,” he said.

Jim Towey, a lawyer for Mr. Wilson, said he and Mr. Wilson had not known that Mr. Bell was formally reviewing the case, although they had assumed it was possible because the prosecutor pledged to do so while campaigning for the job.

“Everybody that’s looked at the case has come to the same conclusion,” Mr. Towey said. “There was not a crime and there should be no prosecution.”

Yeah, here’s the fact check: Wilson was exonerated. Sorry, these are the facts. No crime. No case. And  ‘hands up, don’t shoot' is still a lie.