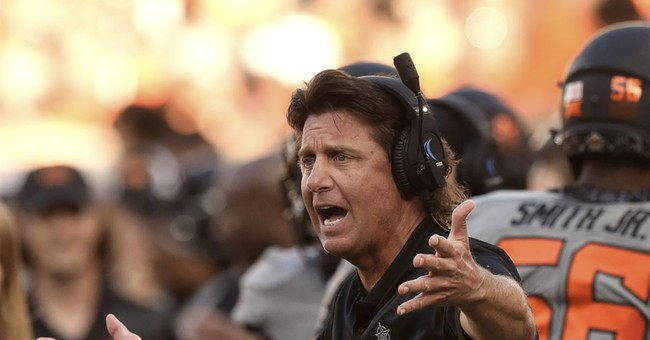 Wearing the wrong t-shirt could get you in trouble. That’s where we’re at right now as this political correctness cancer eats away at free speech rights. Oklahoma State University Coach Mike Gundy went fishing but wore a One America News t-shirt, which caused starting running back Chuba Hubbard to threaten a total boycott playing unless some changes occurred. He tweeted, “I will not stand for this.. This is completely insensitive to everything going on in society, and it’s unacceptable. I will not be doing anything with Oklahoma State until things CHANGE.”

Coach Gundy should tell this player that as long as he's the head coach, the team will support freedom of speech and thought for ALL and if he has a problem with it, he can go play for a different team. https://t.co/saXfu1enZn

I hear and respect the concerns expressed by our Black student-athletes. This is a time for unity of purpose to confront racial inequities and injustice. We will not tolerate insensitive behavior by anyone at Oklahoma State.

Yeah, this is cry baby nonsense. OAN has been critical of the Black Lives Matter movement, so Gundy is now under threat of being canceled. As the mob has scalped numerous figures, especially in major publications in the wake of the George Floyd riots, everyone is hiding under the bed. Everyone is taking preventative measures to avoid the legion of ‘woke’ snowflakes from unleashing hell at their doorstep. It’s absurd.

No, I said the MOVEMENT is a farce, which you would know if you didn't selectively edit a video from four years to make it seem like I said something I didn't. https://t.co/6lOsKMK1ts

It’s even sadder that Gundy caved and apologized for wearing…a t-shirt (via Daily Caller):

Gundy, who already released a video with Hubbard, stated in part, “Once I learned how that network felt about Black Lives Matter, I was disgusted and knew it was completely unacceptable to me. I want to apologize to all members of our team, former players and their families for the pain and discomfort that has been caused over the last two days.”

The left-wing mob doesn’t want an apology, coach. They want to destroy you. If you give them an inch, they’ll take 700 miles. They cannot be trusted. They’re unhinged. And this is just a terrible signal to send, which is these clowns can now bully you for wearing a t-shirt.

The Pope Just Called An American TV Network Satanic for Criticizing Him
Townhall
Biden's deputy press secretary fires back after WSJ editorial calls him 'a modern political flack … incapable of embarrassment'
Twitchy
The Tyrannical Scenes out of Australia Grow Darker and More Disturbing
Redstate
It Gets Worse: Look Who Worked Together to Frame Donald Trump With Fake Russia Hoax
PJ Media