Wow: Nissan Executive Had to Flee Japan for a Specific Reason 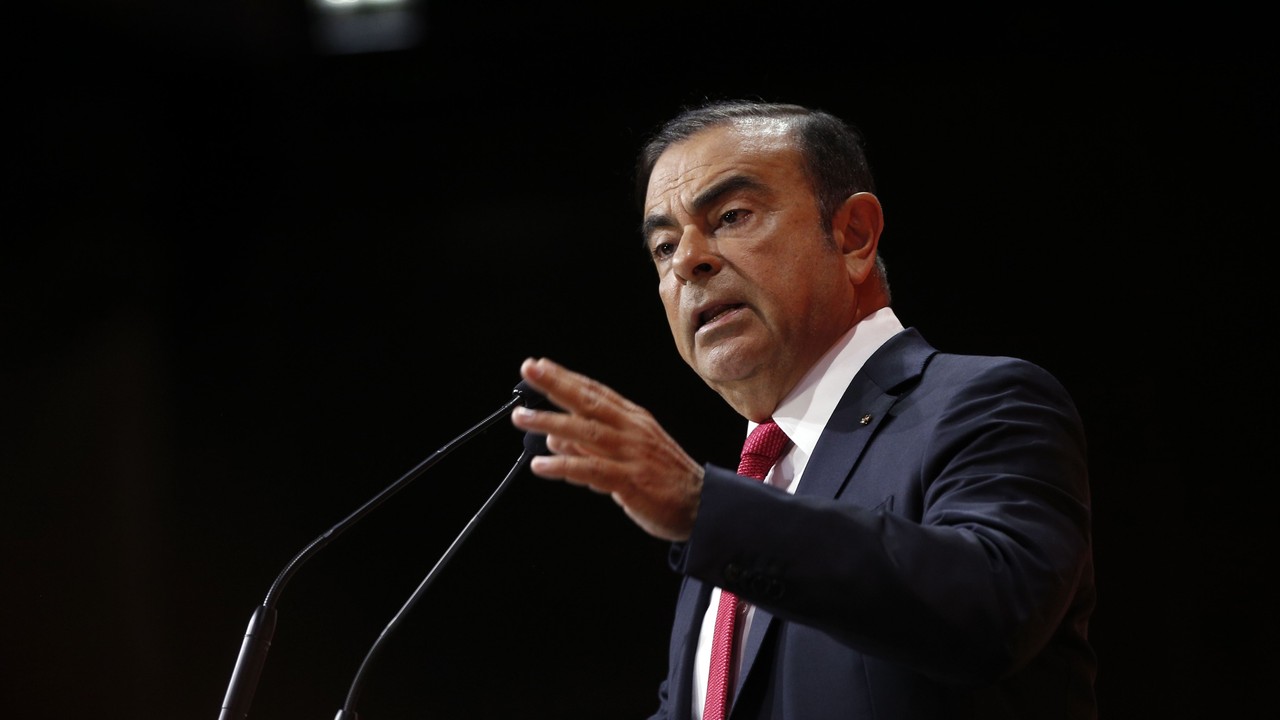 Okay—suffice to say that if you get arrested in Japan, you’re screwed. And it seems if you’re a foreigner who gets arrested, you’re doubly screwed. Enter Carlos Ghosn, a Brazilian-born Lebanese former auto executive who rose through the ranks at Michelin before becoming Renault’s executive vice president. He’s been accused of financial misdeeds by Japanese authorities and arrested in April of 2019. He was in and out of jail throughout most of last year. It’s a story of corporate intrigue and Japan’s criminal justice system, which is shady to say the least. The nation has a conviction rate of over 99 percent. We’ll get to that in a second.

For Ghosn, he was held for over 100 days before posting bail and agreed to terms such as being forbidden to leave Tokyo and have his movements tracked by authorities. He was later prohibited from speaking to his wife. They didn’t talk for several months. The New York Times has a pretty good piece from December 2019 that detailed why Ghosn felt compelled to orchestrate his escape from the country:

Carlos Ghosn, the former chairman of Nissan who was facing charges of financial wrongdoing in Japan, has fled the country and taken refuge in Lebanon, where he is considered something of a folk hero, to escape what he called “injustice and political persecution.”

His flight was a dramatic turn in the already unlikely story of the rise and fall of one of the automobile industry’s most prominent executives.

Mr. Ghosn, who has strongly maintained his innocence, was set to stand trial in 2020, and the circumstances under which he left Japan were not immediately clear. He had posted bail of $13.8 million and was under close watch by the authorities.

Still, he was able to get out of the country and, according to a Lebanese newspaper, Al-Joumhouriya, arrived in Lebanon on a private jet from Turkey. His wife, Carole Ghosn, is with him in Lebanon at a home with armed guards outside, a person with knowledge of the matter said.

After Renault acquired a large stake in Nissan in 1999, Mr. Ghosn was sent to help turn the Japanese company around — an assignment that was seen as impossible for a foreign executive. Though he closed factories and laid off some 21,000 workers, Mr. Ghosn succeeded in reviving the Japanese carmaker. His efforts in the industry have earned him the nickname “Le Cost Killer.”

He was also the architect of Nissan’s alliance with Renault and Mitsubishi Motors of Japan, a partnership that allowed the two automakers to share the cost of developing new models and buying components together. He became the first person to simultaneously serve as chief executive of two major companies.

But some at Nissan were concerned that he was pushing for a merger, and he had blamed his arrest on “plot and treason” by executives at Nissan.

Since his arrest, he has been removed as chairman of all three companies, and Renault, Nissan and Mitsubishi have struggled to reboot their alliance. Last month, they announced a new structure, appointing a general secretary at the top of their partnership, hoping to accelerate business and make a sharp break from the way Mr. Ghosn ruled over the alliance.

With his passports in the hands of the Japanese, Ghosn solicited the help of a former U.S. Army Green Beret and an audio equipment case (via WSJ):

It was Sunday evening, Dec. 29, the moment of truth in a plan so audacious that some of its own organizers worried at times it wouldn’t work. A team of private security experts hired to spirit Mr. Ghosn out of Japan hadn’t done a dry run of their scheme to sneak the box containing the former auto executive past airport security, according to a person familiar with the matter. That is standard operating procedure for such a high-stakes smuggling operation. They had cased the airport just twice before, including that morning.

“It’s impossible,” one team member had said during the planning.

Mr. Ghosn’s decision to jump bail in Japan set in motion a 23-hour international caper with little modern precedent. The plot involved scoping out vulnerable airports, human messengers and a predawn plane transfer on the tarmac of a nearly deserted airport in Istanbul.

That drizzly evening, two people accompanied the wheeled box—typically used for concert gear—through the private-jet lounge of Osaka’s Kansai International Airport, according to an account provided by Japanese authorities to local journalists and a person familiar with the matter. The team passed the wood-paneled entrance of the lounge, called Tamayura, or “brief moment,” down a hallway and around a pair of crescent-shaped cream-colored sofas to the security checkpoint.

Mr. Ghosn’s case made it past the checkpoint unexamined: It was too large to fit in the lounge’s X-ray machine, and no one checked it by hand either, the person said. The box was then loaded into the cabin of a 13-passenger Bombardier Inc. Global Express jet through the rear cargo door. A decoy box, this one actually filled with audio equipment, was also wedged inside the cabin. The plane took off a short time later, flight records show.

Ghosn said he fled to escape injustice and felt he would have died in Japan if he had remained, declaring that there was no way he was going to get a fair trial. His escape led to Interpol filing an arrest warrant. Ghosn is now in Lebanon which does not extradite its nationals. Yet, before we rush to tar and feather someone accused of corporate greed, we need to examine the Japanese way of prosecuting criminals. There is no way every conviction in Japan nabbed the right guy. And indeed, we have evidence showing that innocent people do confess to crimes they didn’t commit? But why?  BBC wrote about this back in January of 2013, centering on one case in October of 2012 about a planned school attack:

It started with a threat posted on the city of Yokohama's website in late June: "I'll attack a primary school and kill all the children before the summer."

In the months that followed, there were a number of similar threats posted on the internet - some threatening famous people, including the Emperor's grandchildren.

After a police investigation, four people were arrested. Two, including a 19-year-old student, confessed while in custody.

But on 9 October, the real perpetrator sent an email to a lawyer - Yoji Ochiai - and local media, explaining how he or she made those threats by taking control of innocent internet users' computers with a virus.

His or her purpose, as stated in the email to Ochiai, was "to expose the police and prosecutors' abomination".

And in a way, it did. It raised the question - why did the innocent people confess to a crime that they didn't commit? What kind of pressure were they put under?

Shoji Sakurai spent 29 years in jail for a robbery-murder that he didn't commit. It took him another 15 years to win a not-guilty verdict at his retrial last year.

"I was a bit naughty when I was young and the Japanese police go after people with criminal records, so my friend Sugiyama and I became prime suspects for the murder."

When arrested, aged just 20, he was treated like a guilty criminal, he says.

"They interrogated me day and night, telling me to confess. After five days, I had no mental strength left so I gave up and confessed."

As the article noted, confession is king—and it’s the reason why Japan’s conviction rate is where it is right now. It’s madness. Oh, and there is more of an emphasis on motive than actual evidence:

Unlike a British or American court, where it is only necessary to prove the facts, Japanese courts attach great importance to motive. The reasoning and impulses which led to a crime must be proved in a court; they are a crucial factor in determining a convicted criminal's sentence. The who, what, where and when are not enough: a Japanese judge demands to know why. A detective, then, is obliged to get inside his subject's skull - if he fails to do that, he is not considered to have done his job. In reality the only way to do this is by obtaining a confession.

In some cases, police prefer to carry out their physical investigation only after obtaining a confession. The hope is that a suspect will disclose incriminating information unknown to the detectives, which will then be confirmed by subsequent investigation - thus making the confession all the more convincing, and allaying suspicious that it may have been obtained under duress.

So, given all that we know about the Japanese criminal justice system, you can see how things can quickly go off the rails for those ensnared by the authorities and why we simply cannot trust what the Japanese are saying about this case. For starters, their reports on Ghosn’s crimes were peddled without evidence. Fake news isn’t just an American thing (via France24):

Carlos Ghosn was taken into custody straight from his corporate jet; and was arrested on suspicion of under-reporting his pay as head of Nissan by some €40 million over five years. After being held without charge for three weeks at the Tokyo Detention Centre, the French-Lebanese-Brazilian businessman was indicted for financial misconduct on Monday, and was immediately re-arrested for similar wrongdoing over three additional years.

Not coming clean about his salary in annual corporate filings was the only allegation that has been made public since his arrest on November 19. Nevertheless, Japanese media were quick to publish uncorroborated reports of other acts of financial misconduct, painting a picture of a greed-driven foreigner who pursued a lavish lifestyle using Nissan as his personal piggy bank, while relentlessly cutting costs at the carmaker.

The conditions in which Ghosn is being held have sparked concern. He has been cut off from the outside world and has only been allowed to see his lawyer and a handful of people from the French, Brazilian and Lebanese consulates. The Wall Street Journal described the situation as a “bizarre inquisition”. In Beirut, billboards supporting the businessman have popped up.

At a press conference shortly before a court granted a second extension to Ghosn’s detention, Shin Kukimoto, Deputy Chief Prosecutor for the Tokyo District Public Prosecutors’ Office, responded to criticisms: “Each country has its own system based on its history and culture. I doubt if it’s appropriate to criticise another jurisdiction just because it runs on a different system.”

In Japan, arrests are generally made by police and handed to prosecutors who examine whether there is enough evidence to indict and try the suspect. But prosecutors also have the power to investigate, arrest and indict on their own.

Nobuo Gohara, a lawyer and former prosecutor specialising in corporate governance, tells France 24: “The extraordinarily high conviction rate indicates that in Japan, whether a suspect is guilty or not is almost solely decided by prosecutors. Even if the prosecutors wrongly indict a suspect, it is extremely difficult to reverse that decision in court. Few judges are willing to deliver an innocent verdict. And this has led to some false convictions. “

Hell, thy name is the Japanese criminal justice system. And yes, Japan still is trying to get Lebanon to hand Ghosn over.