Another One Bites The Dust: Amy Klobuchar Dropping Out 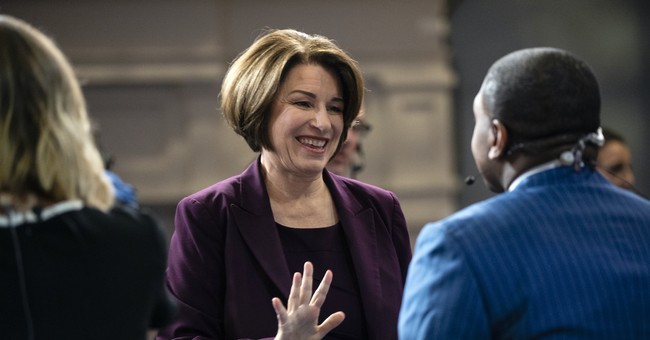 Well, a day after former South Bend Mayor Pete Buttigieg dropped out after a poor showing in the South Carolina primary, Sen. Amy Klobuchar (D-MN) has now done the same:

BREAKING: @amyklobuchar is dropping out of the presidential race, will fly to Dallas tonight to join Biden and endorse

NEWS: @amyklobuchar confirms the Senator is flying to Dallas to join @JoeBiden at his rally tonight where she will suspend her campaign and endorse the Vice President.

Breaking News: Amy Klobuchar, who pitched herself as a moderate Midwesterner, will end her presidential campaign and endorse Joe Biden https://t.co/hn0a0QWq5E

The Minnesota liberal, who ran for over a year, was marked by solid debate performances that increased her profile, gave her a nice boost in her war chest numbers, and allowed her to perform above expectations. Who would think she could finish third in the key New Hampshire primary? Again, it’s more of a feel-good story; finishing third isn’t good—but it showed that Amy could hit above her weight class in a field dominated by the Democrats’ lurch to the left. Klobuchar tried to cast herself as the sensible candidate, one who isn’t willing to Bern it all down. Her main competition in that narrative fight was former South Bend Mayor Pete Buttigieg who dropped out this weekend. Yet, the fairy tale started to fall apart in Nevada. Klobuchar needed another solid debate performance to keep treading water at least, and she was attacked aggressively by Mayor Pete. She did okay in that bout, but it was clear after Nevada and South Carolina that her stock would only go down from there. Bernie Sanders was cleaning up with key groups in the Democratic Party, like Latinos, young people, and very liberal voters. All demographics under the age of 45 were feeling the Bern and in a crowded field like this, continued growth for Amy was probably not going to happen.

With Pete dropping out, the odds of a contested convention increased according to some pollsters. That would be messy, though highly entertaining. I’m not saying Klobuchar dropped out because of this, as she was a longshot from the get-go, but now the door is truly shut. After Joe Biden's solid victory in South Carolina, both Amy and Pete dropped out, with the former expected to endorse the former vice president. So, expect some collusion stories about this, and whether this is enough to block the Bernie train (via NYT):

Senator Amy Klobuchar of Minnesota, who entered the Democratic presidential race with an appeal to moderate voters and offered herself as a candidate who could win in Midwestern swing states, has decided to quit the race and endorse a rival, former Vice President Joseph R. Biden, Jr., according to a person close to Ms. Klobuchar.

Ms. Klobuchar will appear with Mr. Biden at his rally in Dallas Monday night. The decision comes one day after former Mayor Pete Buttigieg of South Bend, Ind., departed the race, and after weeks of Democratic Party hand-wringing about a crowded field of moderate candidates splitting a finite field of centrist votes, allowing Senator Bernie Sanders of Vermont to march forward unopposed among progressives and amass delegates.

Joe Biden, who was written off for dead, is now back in the race—and it very well could be Joe and Bernie duking it out for the top spot. The question now is who drops out next? All eyes on Liz Warren who is also in the ‘doesn’t have a shot in hell to win the nomination’ category.