After These Remarks About White People, It's No Shock Pro-Trump Impeachment Law Expert Went After Barron 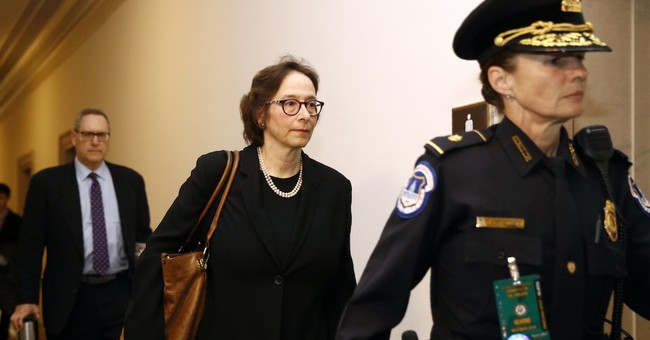 Stanford law professor Pamela Karlan was one of the three liberal experts Democrats yanked onto the Hill in order to make the case that President Donald Trump is literally the evilest man on the planet. It was a predictable clown show. Of course, Karlan was biased. As was Noah Feldman, another so-called law expert from Harvard, who pretty much said that if we couldn’t impeach Trump, we’re no longer living in a democracy; it’s a dictatorship. It’s this sort of hyperbolic nonsense that has just killed the credibility of this impeachment push. It was already tainted by partisanship. This whole thing got off the ground in the bunker under the secretive watch of Rep. Adam Schiff (D-CA), the House Intelligence Committee chair, who released a 300-page work of fiction outlining Trump’s supposed grave abuse of power regarding his July phone call with the Ukrainians, where the president supposedly threatened to withhold aid unless a corruption investigation into Hunter Biden was opened. Hunter had a $50,000/month job at Burisma, a Ukrainian energy company, where he was allegedly selling access to top Obama officials. Hunter got this gig when daddy Biden was VP. There was no quid pro quo. There was no bribery. The Ukrainian president said he never felt pressured. It’s all hearsay. And hearsay from mostly anti-Trump bureaucrats.

That’s the basis for their shoddy impeachment offensive against the Trump White House. It’s absurd. And it’s made more of a clown show when one of these opinion experts was caught making a speech against white people and conservatives back in 2006 (via War Room: Impeachment):

Stanford law professor Pamela Karlan – the Democrats’ “constitutional expert” in the Judiciary Committee hearings – launched into a scathing tirade against white people in a 2006 speech to the American Constitution Society.

“We have to seize back the high ground on patriotism and on love of our country, because we have more reason than they do to love America,” she told a fawning, liberal audience.

“The rich, pampered, prodigal, sanctimonious, incurious, white, straight sons of the powerful do pretty well everywhere in the world, and they always have.

“But what about us? Snarky, bisexual, Jewish women who want the freedom to say what we think, read what we want, and love who we do.”

House Democrats invited three professors to testify against Trump today. One previously said Congress didn't need any evidence at all to impeach Trump, another said she couldn't even walk by Trump Tower, and the third helped run Dianne Feinstein's anti-Kavanaugh smear operation.

Yeah, remember when she said she didn’t hate conservatives or something when pressed by Rep. Matt Gaetz (R-FL) yesterday. Oh, and let’s not forget her shameless attack on Barron Trump. When you hear excerpts from that 2006 speech, it’s par for the course I guess concerning her remarks yesterday before the House Judiciary Committee.

She just went out of her way to mock and attack Barron Trump, the President's 13-year-old child.

Democrats have disgraced themselves by giving a platform to this unhinged, petty kook. pic.twitter.com/LuteVNdbS7