CNN Contributor Tweeted About The California Fires Closing In On The Reagan Library...It Ended Poorly 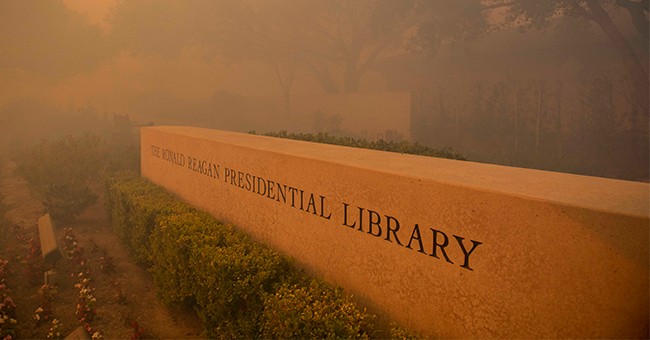 California wildfires are raging right now, thanks to the hurricane-force gusts that are fueling it. Thousands of residents have been evacuated and Gov. Gavin Newsom has declared a state of emergency. The Reagan Presidential Library is currently at risk of being torched, and the high winds are making containment of the blaze difficult (via WSJ):

Strong winds are expected to continue in Southern California, complicating efforts to contain a new 1,300-acre blaze, as the threat of even more wildfires rattles a state already on edge.

Firefighters on Wednesday were fighting a fast-spreading brush fire in the Simi Valley area, northwest of Los Angeles. The Easy Fire burned the hillside around the Ronald Reagan Presidential Library and prompted mandatory evacuations in the immediate area.

Sparked just after 6 a.m. local time, the blaze grew to over 1,000 acres within four hours amid gusty winds and dry conditions, threatening around 7,000 homes.

“It was about the worst time it could happen,” Ventura County Fire Chief Mark Lorenzen said of the strong winds at the time the fire began. “Unfortunately for us, the winds are going to continue for another 24 hours.”

With presidential history at stake, in addition to people’s lives, homes, and livelihoods—CNN contributor Keith Boykin, a frequent Trump critic and former Obama aide, decided to tweet, "for those who think God punishes sinners with natural disasters," linking to a Fox News story about the wildfire closing in on the library.

The Left hates Reagan, so you’d imagine the response he received. Yes, the intolerant Left, the classless Left, and petulant Left were on full display here. Yet, Boykin insisted that this wasn’t his intention.

Earlier today, I posted a tweet to make the point that God does not punish people with natural disasters. Unfortunately, many people interpreted my tweet to say the exact opposite. To clear up any confusion, I have deleted the tweet.

“Earlier today, I posted a tweet to make the point that God does not punish people with natural disasters,” he wrote on Twitter. “Unfortunately, many people interpreted my tweet to say the exact opposite. To clear up any confusion, I have deleted the tweet.”

Misunderstood? Hey, right now, I’m more concerned about the wildfires, containing them, and specifically hoping first responders can keep the inferno from engulfing the Reagan Library. At the same time, this isn’t the first time Boykin has tripped over himself by tweeting something awful (via Washington Times):

An Amtrak train carrying Republican lawmakers to a multi-day policy retreat in Greenbrier crashed into a truck en route Wednesday. At least one person in the truck was killed and some passengers reported minor injuries. None of the Congress members or their staff suffered any serious injuries.

Before any injuries were reported, Mr. Stein, formerly of The Huffington Post, tweeted, “Cmon. Did they stage this metaphor?” according to a screenshot posted by The Daily Caller.

Mr. Stein later deleted the tweet, saying he realized it was “insensitive.”