'It Looks Bad, It Smells Bad': CNN Reporter Admits Joe Biden Has A Problem With His Son's Ukraine Ties 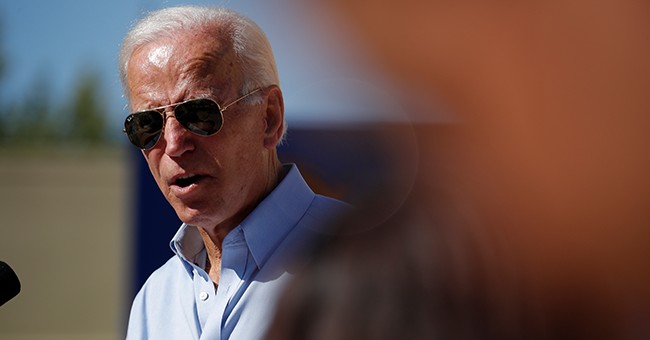 Former Vice President Joe Biden has tried to dodge his son’s Ukraine ties. Hunter Biden was on the board of an energy company, Burisma, making $50,000/month despite having zero experience in the energy sector. What was he there? The allegation that he was there to sell access reeks to high heaven, and the Biden campaign’s utter failure to address the issue has let the issue fester. Joe being irritated certainly doesn’t dispel the insinuation that this was a sweetheart deal that one would see constructed in the swamp. Unethical and corrupt—this is perfect cannon fodder for the Trump campaign and a way for this administration to make House Democrats’ impeachment push look more like a poison pill. The more these clowns talk about quid pro quo allegation regarding Trump and the Ukrainian president, the more light is shined on Hunter Biden’s Ukraine ties. The Trump White House released the transcript of the phone call between Trump and the Ukrainian political leadership; there was no discussion of aid being withheld unless a corruption probe was opened into Hunter Biden’s Burisma dealings. There was no quid pro quo. As for Biden, well, Hunter did an interview with ABC News where he admitted that he wouldn’t have the job opportunities if his father wasn’t a former vice president. He pretty much admits what we all knew about this deal:

During his first television interview since his father announced a 2020 presidential run, Hunter Biden admitted that his status as the son of a sitting vice president helped him gain access to company boards that would have otherwise been unavailable to him.

"I think it is impossible for me to be on any of the boards you just mentioned without saying I'm the son of the Vice President of the United States," Hunter Biden said.

Hunter Biden: would “probably not” be on any foreign company boards if Joe Biden was not VP pic.twitter.com/cGPyXJ4sqW

- I used Biden name to get on Ukrainian gas board

- Sick of answering “these questions” pic.twitter.com/zsL53jcfkF

What’s more. Even some folks at CNN, one of the most prolific anti-Trump media networks out there, are admitting that this Hunter Biden-Ukraine story is just bad for the former VP.

Evan Perez, CNN’s chief justice correspondent, said, “Now, I’ll tell you this. Joe Biden has a problem because his son was trading in his name. It looks bad. It smells bad.”

He added that there’s nothing illegal about it, but if you want to win an election, this cannot be left to linger. Expect a question about this during tonight’s debate. We’ll see if Joe loses his temper again.