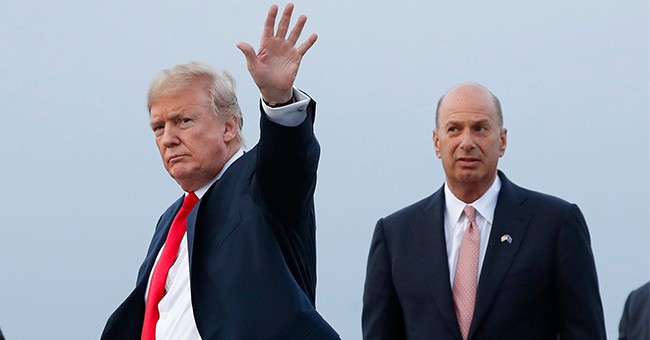 President Donald Trump is now getting deeper into the House Democrats’ impeachment game. It’s not a fight he wants. In fact, no one with cognitive function wants this, but the Democratic Party has become infected with Trump Derangement Syndrome, so here we are; this plan has been in the works since 2016. They tried to get him on Russian collusion. They couldn’t. The investigation by ex-Special Counsel Robert Mueller also torpedoed that whole circus and debunked the Steele dossier, compiled by an ex-MI6 spook Christopher Steele, which was the basis for the whole collusion charade. This was an opposition research project funded by the Hillary Clinton campaign and the Democrats, by the way. So, they waited and now this whistleblower, who is reportedly a CIA agent, comes forward with a second-hand account that Trump threatened to withhold military aid from Ukraine unless they opened a corruption probe against Hunter Biden, son of former Vice President Joe Biden, in July.

The White House released the transcript which debunked all of the juicy allegations. There was no quid pro quo. In fact, it appears as if the Ukrainians only found out about a U.S. foreign aid review a month after the call. Trump insists that other European nations should also contribute to the aid package.

So, the latest impeachment push is based on evidence even shoddier than the Russian collusion myth. And what’s more, is that the Hunter Biden probe might have already begun months before Trump’s phone call. John Solomon has more (via Fox News) [emphasis mine]:

Solomon said Tuesday on "Hannity" that the U.S. government knew Ukraine was planning to look again into activities at Burisma Holdings, an energy company that employed then-Vice President Joe Biden's son as a member of its board of directors, early this year. The report is noteworthy because President Trump has been accused by Democrats of threatening in July to withhold foreign aid to Ukraine unless its new president pursued an investigation into the company and the younger Biden's role there.

"The U.S. government had open-source intelligence and was aware as early as February of 2019 that the Ukrainian government was planning to reopen the Burisma investigation," he claimed. "This is long before the president ever imagined having a call with President Zelensky," he added, noting Petro Poroshenko was still Ukraine's president at that time.

Solomon said the information he obtained, including documents shown on "Hannity" Tuesday, was omitted from a U.S. intelligence community whistleblower's complaint lodged against Trump last month.

Solomon said that NABU -- an FBI-like anti-corruption agency in Ukraine -- requested the probe into Burisma and owner Mykola Zlochevsky be reopened earlier this year. The investigation then went forward, Solomon said. The new probe later resulted in a "Notice of Suspicion" being filed, alleging the existence of "illicit funds" running through the firm, Solomon also claimed.

Hunter was with Burisma, being paid tens of thousands of dollars a month despite having zero experience in the energy sector. The whistleblower report is riddled with errors and this person did not listen in on the call. This person was also cited for being politically biased against the president, being a registered Democrat and working for a 2020 Democratic candidate. The complaint wasn’t even released to Congress before the impeachment inquiry began. Yeah, no one read it before the Left pulled the trigger, so you know they’re taking this seriously.

And now this…we’ll just have to see what happens. As of now, the Trump White House has rightfully told House Democrats to shove it, refusing to cooperate in their kangaroo court that is politically motivated and intended to overturn the results of the 2016 election.

UPDATE: Ed, our friend at Hot Air, disputes the noteworthiness of the Solomon report, noting that everything he said has been known for many moons ago. So, the timeline hasn’t changed:

The problem for this explanation, and for Trump in the Zelensky call, is that we already know Poroshenko had moved to reopen the Burisma probe. It wasn’t a secret at all; the New York Times reported it in May, two months after the [Petro]Poroshenko government [the previous government before Zelensky] had given it the green light and two months before the call with Zelensky. The circumstances of that decision appeared a little suspect to the NYT at the time

In other words, this new document doesn’t actually shift the factual timeline at all. Everyone knew by May that the previous Ukrainian administration had been prepared to reinvestigate Burisma and (perhaps) by extension the Bidens. And then everyone knew at the same time that Zelensky was changing prosecutorial priorities, and that the Burisma probe might get dumped once again. The omission of the February/March intel on the Poroshenko government’s actions from the whistleblower complaint doesn’t matter because (a) it had been mooted by the Ukrainian election and (b) everyone already knew it. The incentive for Trump to get Zelensky to continue the Burisma probe still existed at the time of the call, and perhaps was stronger than in March when Poroshenko had already acquiesced to Trump.

That doesn’t mean that Trump demanded a quid pro quo from Zelensky, and the transcript of the call doesn’t support that contention anyway.

So, maybe the timeline hasn’t changed, but it still doesn’t negate the fact that this is still a witch hunt. Even without the Poroshenko-Zelensky angle, the Ukrainians reportedly still didn’t know that the aid package being under review until a month after. That alone is a kill shot; you cannot have quid pro quo without…the quid factor. And the Biden allegation is still lingering in the air because it does seem like an odd position, particularly with his fee, which former Ukranian Prime Minister Mykola Azarov says should be looked into as a way to cross the “t”s and dot the “t”s on a legal front.