Gruesome Twosome: This Is How Bad CNN And MSNBC Overreacted To Trump’s Hurricane Dorian Map 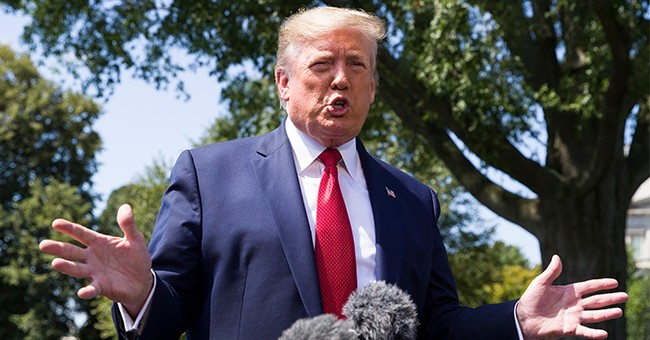 President Trump’s Hurricane Dorian projection map caused a stir since it showed Alabama being a possible target. The intended path of the major hurricane has since changed, with it now hugging the Eastern Seaboard but not before totally destroying the Bahamas. The loss of life could be horrendous as the storm stalled over the islands for nearly 40 hours. Apparently, there was a lot of hubbub over Alabama, so let’s rehash this whole fiasco (via Associated Press):

During an Oval Office briefing … Trump displayed a map of the National Hurricane Center forecast for last Thursday that showed Dorian could track over Florida. The map he displayed included what appeared to be a hand-drawn half-circle that extended the cone of uncertainty over a swath of Alabama.

Trump had raised eyebrows and drawn an emphatic fact check from the National Weather Service on Sunday when he tweeted that Alabama, along with the Carolinas and Georgia, “will most likely be hit (much) harder than anticipated.”

The National Weather Service in Birmingham, Alabama, tweeted in response: “Alabama will NOT see any impacts from #Dorian. We repeat, no impacts from Hurricane #Dorian will be felt across Alabama. The system will remain too far east.”

Few, if any, meteorologists put Alabama in the hurricane’s path. Asked Sunday if Trump had been briefed about potential impact to Alabama, Christopher Vaccaro, a spokesman for the National Oceanic and Atmospheric Administration, wrote in an email, “The current forecast path of Dorian does not include Alabama.”

An adviser to Trump released a statement explaining the whole episode, but that didn’t stop CNN and MSNBC beclowning themselves for combined two-plus hours of coverage (via Newsbusters):

As Hurricane Dorian continues to wreak havoc across the eastern seaboard, liberal cable anchors are fixated on perhaps the most frivolous piece of the news cycle: President Trump’s poorly-doctored hurricane map. Between 5:00 am and 5:00 pm Eastern time on Wednesday, CNN and MSNBC gave this non-news item a whopping 145 minutes (just under two and a half hours).

CNN gave the map incident just over 64 minutes of airtime. Between bouts of theatrical scoffing, hosts brought in analysts or outside experts to explain precisely why the President’s doctored map was a travesty of heretofore unseen proportions.

The first instance of this was during the 11:00 am ET At This Hour, in which CNN’s Brian Stelter joined the panel to share his eternal concern about the President’s mental state.

“I wish he was tweeting more about the Carolinas and what’s going on around the coast, and not Alabama,” Stelter complained near the end of seven and a half-minute segment which focused entirely on Trump’s map.

Well, CNN should just shut its face because as we noted yesterday, they couldn’t even find Alabama on the map. They mistook Alabama for Mississippi. Also, the noted anti-Trump network also said that The Heart of Dixie was “under threat.”

"There are many states that are under threat right now."

"At least 6. From the Carolinas right through Georgia coastline into Florida certainly & then also even into the Gulf of Mexico, Louisiana, Alabama, Mississippi" pic.twitter.com/FzF14leKI8