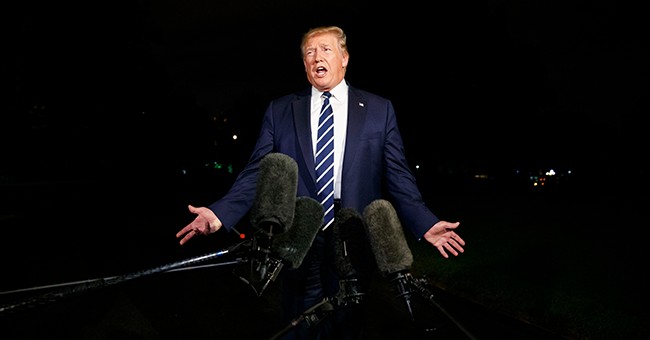 President Trump has once again elicited the ‘gotcha’ reaction from the liberal news media. He apparently used an old map projection for Hurricane Dorian, which has utterly devastated the Bahamas, but blessedly changed course, with Florida avoiding a direct hit. It’s now barreling up the Eastern Seaboard, hugging the coastline but not making landfall. It’s now a category two storm. Anyways, here is the Associated Press as to why we’re talking about Dorian, Trump, and maps:

During an Oval Office briefing Wednesday, Trump displayed a map of the National Hurricane Center forecast for last Thursday that showed Dorian could track over Florida. The map he displayed included what appeared to be a hand-drawn half-circle that extended the cone of uncertainty over a swath of Alabama.

Trump had raised eyebrows and drawn an emphatic fact check from the National Weather Service on Sunday when he tweeted that Alabama, along with the Carolinas and Georgia, “will most likely be hit (much) harder than anticipated.”

The National Weather Service in Birmingham, Alabama, tweeted in response: “Alabama will NOT see any impacts from #Dorian. We repeat, no impacts from Hurricane #Dorian will be felt across Alabama. The system will remain too far east.”

Few, if any, meteorologists put Alabama in the hurricane’s path. Asked Sunday if Trump had been briefed about potential impact to Alabama, Christopher Vaccaro, a spokesman for the National Oceanic and Atmospheric Administration, wrote in an email, “The current forecast path of Dorian does not include Alabama.”

This was the originally projected path of the Hurricane in its early stages. As you can see, almost all models predicted it to go through Florida also hitting Georgia and Alabama. I accept the Fake News apologies! pic.twitter.com/0uCT0Qvyo6

Alabama was going to be hit or grazed, and then Hurricane Dorian took a different path (up along the East Coast). The Fake News knows this very well. That’s why they’re the Fake News!

Trump has insisted that Alabama was possibly on Dorian’s projected path. This was backed up by one of his advisers as well (via The Hill):

One of President Trump's top advisers on Hurricane Dorian issued a lengthy statement on Thursday defending the president's repeated claims that forecasts showed Alabama getting hit by Hurricane Dorian, adding another twist to the days-long effort to justify Trump's claim.

The White House circulated a statement on official letterhead from Rear Adm. Peter Brown, a Homeland Security and counterterrorism adviser, who said he briefed Trump multiple times about Dorian as well as models that showed the potential path of the eye of the storm.

"While speaking to the press on Sunday, Sept. 1, the President addressed Hurricane Dorian and its potential impact on multiple states, including Alabama," he continued. "The president’s comments were based on that morning’s Hurricane Dorian briefing, which included the possibility of tropical storm force winds in southeastern Alabama."

But of course, CNN had to get in on the action. The noted anti-Trump network harped on the map the president had used but then was served a piping hot cup of shut the hell up when they couldn’t even point to where Alabama is on the map. Sorry, Alabamans—you’re now Mississippians now.

So, CNN gets all in a twist over Trump using a certain map but doesn’t even know basic U.S. geography. Nice work, morons. Oh, and everyone has a plan until you get punched in the mouth, huh?