Out Of Luck: Colts Nation Takes A Kidney Punch 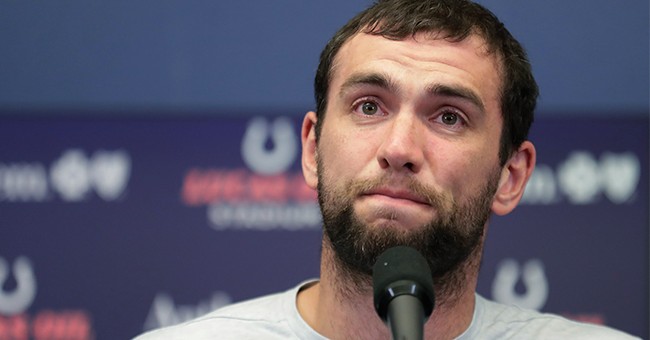 Andrew Luck, who had signed a $140 million extension with the Indianapolis Colts, decided to retire at the age of 29. Still young. Still, in his prime, the Colts’ franchise quarterback decided to call it quits two weeks before the start of the regular season. The announcement sent shockwaves through the NFL and the sports journalism world. Luck appeared to be ready for the 2019 season, saying in December that he pretty much was loving the game the most out of any point in his career at that point. Yet, Luck has been marred by injuries: a shoulder injury that left him sidelined for the entire 2017 season, a lacerated kidney, a partially torn abdomen, and now this mysterious ankle injury. Luck is walking out on anywhere between $250-500 million. In an emotional press conference, Luck said that brutal cycle of injury, rehab, injury, and rehab had caused him to rethink what’s important in life; he wasn’t able to live the way he wanted. The August 24th announcement is considered by some to be the biggest NFL scoop of the Twitter era and it was NFL insider Adam Schefter who nabbed it (via The Big Lead):

Even as we’ve had the day to digest the news that Andrew Luck is retiring at 29, Adam Schefter’s Saturday night scoop came from beyond the clouds. You had to check the news eight times to make sure it wasn’t some troll job. When it became clear the news was real, it was jaw-dropping. Thinking about it, it’s the biggest single NFL scoop since advent of Twitter in 2006, and it could even go back a lot further than that.

Certainly, there have been bigger broader stories than this one. The Mort 12 football Deflategate scoop would’ve been bigger than this had that info not wound up being marred by intel from the league side that was at best misleading and possibly false. Colin Kaepernick, Aaron Hernandez, Darren Sharper, Ray Rice, Spygate, Bountygate and CTE have all been bigger story subjects but there’s not really a transactional scoop that everybody associates with them.

To get to the same scoop realm, I think you need to go all the way back to Chris Mortensen breaking the news late at night on ESPN in July of 1999 that Barry Sanders was retiring from the Lions. In a brief Twitter exchange with me, Mort said he agrees that Luck is the biggest scoop since Sanders and that this one is even bigger. I’ll defer to his knowledge here, but think you could make a reasonable argument the Sanders news was a bigger stunner since he was healthy whereas Luck has been battling arm and leg injuries for several years.

Andrew Luck is 29 years old. And ready to move on from the NFL.

Filed to ESPN: Andrew Luck has informed the Colts he is retiring from the NFL, per source. There will be a press conference Sunday to make it official, but Luck is mentally worn down, and now checking out.

Andrew Luck already has met with Colts’ owner Jim Irsay to tell him that he is retiring, per source.

The #Colts have known that QB Andrew Luck was seriously mulling retiring for at least two weeks. He’s married, he plans to travel the world, and once the love for the game waned, it sounds like he wanted to step away. So, he did.

After battling injury after injury, the word is that #Colts QB Andrew Luck was simply too worn down to continue. And so he abruptly retires at age 29. Jacoby Brissett is the new QB of the Colts.

Andrew Luck retiring like this is the most shocking sports retirement since Michael Jordan. (And we all know how that ended. I think he’ll be back in a couple of years).

Physical toll on Andrew Luck through 6 NFL seasons:
» Torn cartilage in 2 ribs
» partially torn abdomen
» a lacerated kidney that left him peeing blood
» at least 1 concussion
» a torn labrum in his throwing shoulder
» and this mysterious calf/ankle issue that led to this

This is just terrible Luck pic.twitter.com/iwyZlzKG6s

Luck didn’t suffer a career-ending injury, but he has been beaten to a pulp for most of his seven-year tenure in the NFL. The young QB took punishment. The injury history bears that out. It goes without saying, you need to protect your quarterback. You can give him all the weapons on offense if there is no protection--it isn't worth a damn. Yes, there are some notable exceptions concerning QBs who work behind some bad offensive lines. Seattle’s Russell Wilson has been running for his life for a bit now, but he’s able to extend plays and wins games. Houston's Deshaun Watson could win the AFC South for the Texans, but that offensive line has been trouble as well, expect him to also be running around like crazy as the pocket collapses around him. Overall, it leaves your most important position player vulnerable to injury and Watson has been injured; he tore his ACL in 2017. Also, it impacts the run game; you've got to give your running backs a lane they can exploit.

The New York Giants’ Eli Manning has also suffered under horrendous offensive line play, which has produced miserable results for the franchise (I know there are other factors), but the trade-off, in terms of player health, is that Manning is an ironman. In his 16-year career, he’s never been injured.

Luck was talented, certainly one who would win a Super Bowl, but he was at the end of his rope after seven years. What also stuck out was the fan reaction: they booed him. Luck didn’t plan on doing his retirement presser over the weekend, but Schefter moved up that timeline. Is it an a-hole move? Schefter has a job too and if he had enough to go with this story, it was only a matter of time before a competitor did.

The fans booing him off the field in the preseason game against the Bears drew widespread condemnation, but in the heat of the moment, I can’t blame the fans. It was still the wrong reaction, but the booing could be viewed as a culmination of a few things: the front office neglecting to protect Luck, the fact that the news broke prior to the regular season, the fact that the Colts have the personnel that can protect him, weapons on offense, and on paper—a championship-caliber roster. That’s now all cast in doubt with Luck’s departure. It’s disappointing—and we’ve all had moments where our initial reaction wasn’t the best. And we all handle it differently. That doesn’t mean what these folks did to the now-former face of their franchise was right and there is a side that isn’t totally out of line when they say this move should have occurred way earlier in the offseason. For now, the Colts turn to Jacoby Brissett to fill Luck’s shoes. The Colts still have weapons in wideout T.Y Hilton, running back Marlon Mack, and tight ends Jack Doyle and Eric Ebron. They also have an offensive line. Colts Nation took a kidney punch, but hardly the punishment Luck endured. It’s sad to see talent go so soon, but the average NFL career lasts two years. There’s a reason why they say the initials stand for Not For Long.

Best of Luck…there’s no way to write that without being punny.