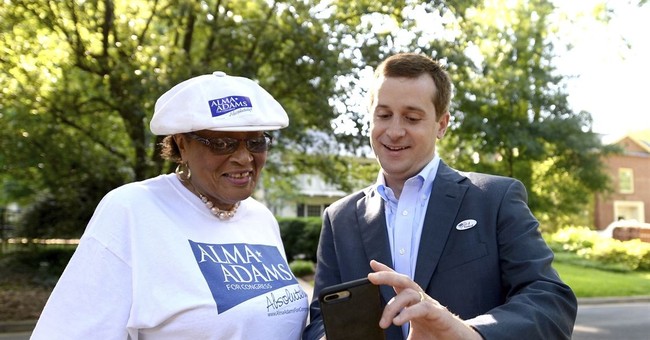 We still have one 2018 race to decide, folks. Yes, I know—what the hell are you talking about? Well, it was in the news last year because voter fraud allegations prevented an official winner from being declared, prompting a re-do race in North Carolina’s 9th Congressional District. The special election will now be held on September 10. This should be an easy win for the GOP. The district is heavily Republican, though last year’s race was razor-thin, with the then-GOP candidate Mark Harris only ahead by a little over 900 votes. Harris decided not to run in the special election.

Why so close? Well, as it turned out, in 2018, the suburban cohort of the GOP betrayed the party in some key races. It’s a whole different ballgame, one that the campaign manager for Democratic candidate Dan McCready understands all too well. And they seem aware that Democrats alone cannot clinch them a win, especially with volatile voter turnout concerning special elections  (via Washington Examiner) [emphasis mine]:

Despite President Trump winning the south-central North Carolina district by 12 points in 2016, Republican candidate Dan Bishop, 54, only has a 4-point advantage on Democratic contender Dan McCready, 35, according to a JMC poll released in May. Jeff Scott, a Libertarian, and Allen Smith, of the Green Party, are additionally in the running.

McCready's been aggressive in his effort to flip the seat, out-fundraising and outspending his opponent. Bishop, previously a member of North Carolina's House of Representatives, was elected to the state's Senate last year. In a strategy memo shared with supporters this week, Colleen Martin, McCready's campaign manager, acknowledged the battle would be "tough."

"To win, we have to accomplish two major goals. First, we need to turn out as many Democrats as possible," Martin wrote, touting the team's field operation and online presence. "We also need to win over 'swing' voters. Because of Republican gerrymandering, our district is too red for turnout alone to win the race."

The article added that hitting McCready on his military service, family man persona, and moderate political stances could make things interesting, and yet—are we going to just gloss over his apparent hypocrisy over dark money from Nancy Pelosi? McCready is against dark money, his Republican opponent Dan Bishop accused him of reaping the political dividends of nearly $1 million in spending in the past election. Oh, and Pelosi’s goons also helped out, as one would expect.

I have no problems with dark money activities. They’re not as nefarious as they sound. The National Rifle Association’s political activities fall under such a category, and they’ve been slapping the anti-gun Left around for years. Just as “assault weapon” is Democrat-speak for scary gun, “dark money” is just lefty temper tantrum throwing over activities or organizations that do well slicing up Democrats. And yes, it looks like McCready took that money big league. Folks, again, I have no problems, but these are their rules. In Democrat-land, the GOP cannot take or be a part of any dark money operation, but Democrats can (via WFAE Charlotte):

Terry [Marshall,  Radio Host]: So is Dan Bishop correct then? Did Dan McCready receive support from a dark money organization?

Thompson, [Elizabeth Thompson of the Raleigh News and Observer]:

He did. So Patriot Majority USA is a liberal leaning dark money nonprofit. They spent roughly $900,000 against Mark Harris who was McCready's opponent. So what these organizations do since they're not legally allowed to give money directly to the candidates they set up anti-campaigns in a way. Instead of spending money directly on McCready, they're spending money against Harris. So they ran TV ads attacking his campaign, Harris's campaign, but don't mention anything about McCready. And they say that they're not sponsored by McCready.

Terry: And the second part of that is, is that organization aligned with Nancy Pelosi as Dan Bishop has claimed?

Thompson: Patriot Majority USA does not have any direct affiliation with Nancy Pelosi. Of course, it's a Democratically aligned organization that favors trying to get Democrats into the House. But Nancy Pelosi has really no past with them that we could find that's very explicitly Pelosi aligned. However, McCready did receive money from the House Majority PAC which does disclose its donors so it's not a dark money organization but it is known to be aligned with Nancy Pelosi and they spent $340,000 against Harris benefiting McCready.

I mean this is more of a secondary reason to oppose McCready. The first, most obvious, being that McCready is a Democrat. Drop the moderate line because we all know moderate Democrats are extinct. They will eventually be forced to drink the Kool-aid, and McCready might already be susceptible to the crazy engulfing the Democratic Party based on what he’s said about Trump, namely that he’s the greatest threat to our Constitution (via The Guardian, c. 2016):

…Dan McCready, served in the marine corps from 2005-09, and was then an inactive reserve, rising to captain. “In my view, Trump is the greatest threat to our constitution and our democracy of my lifetime, and people must view this as a final straw,” the 33-year-old said.

“I think a lot of Americans are living in a Facebook and Fox News distortion field. What I hear from many friends who are conservative is that Clinton is just as bad, that people view the selection as two equally bad choices. I think if you look at the facts and draw your information from reasonable sources, what Trump is doing and what he said is a thousand times worse than what Hillary has done and what Hillary has said.

“It makes me sick to my stomach,” McCready continued. “I think of the hundreds of thousands of Americans who gave up their one precious life for our country. He completely dishonours them. I think Mr and Mrs Khan represent what’s best about America and his belittling them, it really makes me sick.”

Oh, and when he wrote that if you’re a veteran and support Trump, you pretty much tarnished the oath you took in the service to protect the nation from all threats, foreign and domestic:

I’m a businessman and a father now. I am a political moderate who has voted for Democrats and Republicans, and I have never endorsed a political candidate publicly. But, today, I feel a duty to do what I can to stop Donald Trump from undermining the very things we fought for.

Fellow veterans, resist any allure in Trump’s message. Honor what we fought for, and the sacrifices of so many before us, by stopping Trump. We swore to defend the Constitution against all enemies, foreign and domestic. We must put politics aside and, whether we identify as Republican or Democrat, vote for Hillary Clinton.

Well, you’re running as a Democrat, man. You’re obviously not a moderate anymore. One of the biggest reasons for Trump winning, besides being the only candidate to have an aggressive plan to tackle illegal immigration, having a clear economic message, and being something totally new, way outside of the political establishment, is the aversion from voters of being told what to do.

Frankly, Joe Manchin might be the only Democrat I could see voting for if I were a West Virginia resident. He’s rational, doesn’t care about re-election, and has warned his party about the risks of losing rural Democrats. He’s one of a few dwindling voices, however, as the party is becoming consumed with Trump-Russia collusion hysteria, socialism, anti-gun extremism, and adopting a de facto infanticide position on abortion. Yes, abortion is murder—but now voters see that Democrats are supporting bills that permit abortion virtually up until the moment of birth. That’s what you risk getting by voting Democrat this year, next year, or any year in the foreseeable future.