Reports: NYPD Officer Has Been Shot Sitting In Squad Car 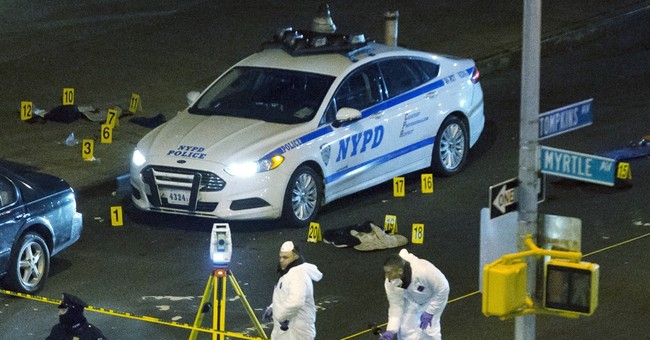 We have disturbing reports coming out of New York City that a police officer has been shot execution-style in Queens. No news is there is a suspect [SEE UPDATE]. It would be the first such attack since the 2014 NYPD shootings that took the lives of officers Rafael Ramos and Wenjian Liu in Bedford-Stuyvesant. The attacker, Ismaaiyl Brinsley, did this out of revenge for the Eric Garner incident (via NYT):

Two police officers sitting in their patrol car in Brooklyn were shot at point-blank range and killed on Saturday afternoon by a man who, officials said, had traveled to the city from Baltimore vowing to kill officers. The suspect then committed suicide with the same gun, the authorities said

The officers, Wenjian Liu and Rafael Ramos, were in the car near Myrtle and Tompkins Avenues in Bedford-Stuyvesant in the shadow of a tall housing project when the gunman, Ismaaiyl Brinsley, walked up to the passenger-side window and assumed a firing stance, Police Commissioner William J. Bratton said. Mr. Brinsley shot several rounds into the heads and upper bodies of the officers, who never drew their weapons, the authorities said.

Mr. Brinsley, 28, then fled down the street and onto the platform of a nearby subway station, where he killed himself as officers closed in. The police recovered a silver semiautomatic handgun, Mr. Bratton said.

Mr. Brinsley, who had a long rap sheet of crimes that included robbery and carrying a concealed gun, is believed to have shot his former girlfriend near Baltimore before traveling to Brooklyn, the authorities said. He made statements on social media suggesting that he planned to kill police officers and was angered about the Eric Garner and Michael Brown cases.

BREAKING NEWS: NYPD Police Officer Shot In The Head While Sitting In Car

BREAKING: Police Officer shot to the head inside a car in Queens on Burns St and 69th Ave. Officer being transported via NYPD car.

BREAKING UPDATE *NYPD OFFICER SHOT* Officer shot in the head at Burns St and 69 Ave in #Queens. This may have been an attempted suicide. Officer rushed to Elmhurst Hospital in critical condition. https://t.co/EpOASrlFi8

Garner died as police tried to arrest him on the suspicion that he was selling loosies (individual cigarettes), which is a crime. He was placed in a chokehold and died during his apprehension. The federal civil rights case into Garner's death is ongoing, with the officer at the center of the controversy, Daniel Pantaleo, refusing to testify today (via AP):

A deadline in a federal civil rights probe loomed large on Wednesday at a disciplinary hearing for a New York City police officer accused of using a banned chokehold in the 2014 killing of Eric Garner, whose dying words - “I can’t breathe” - became a slogan for the Black Lives Matter movement.

A federal prosecutor silently sat in on the proceeding at New York Police Department headquarters where a police union lawyer for Officer Daniel Pantaleo informed an administrative judge that his client wouldn’t testify. The reason: Pantaleo is technically still the target of the federal investigation opened in 2014 after a state grand jury declined to charge the officer.

Absent Pantaleo’s testimony, the defense called a paid expert as its lone witness to testify that Garner died from heart failure. That contradicted the city medical examiner’s finding of asphyxiation.

We’ll keep you updated on the Queens shooting.

UPDATE: As noted in a previous tweet, this appears to have been an attempted suicide and the officer was off-duty at the time.

LATEST: The Officer was off-duty at the time of the incident https://t.co/qCcYAPPOpG