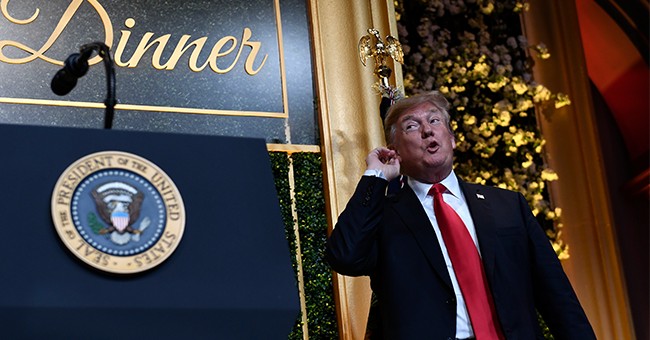 President Donald Trump is shaking up the Department of Homeland Security. DHS Secretary Kirstjen Nielsen has been fired. U.S. Customs and Border Patrol Commissioner Kevin McAleenan is taking over the department. But we still have a border crisis. And even left-wing Looney Tunes, like Bernie Sanders, aren’t into the whole open borders idea. Yet, while DHS is being shaken up, Rep. Ilhan Omar (D-MN) has decided to pick a fight with the Trump White House, attacking top adviser Stephen Miller, who reportedly is behind this retooling at the department, for being a “white nationalist.” Miller is Jewish, so that just doesn’t make sense. Yes, the Left can engage in linguistic gymnastics, it still doesn’t negate or minimize that this line of attack is straight trash and pure idiocy. Also, given Miller’s religious background and Omar being an alleged anti-Semite, it's no shocker that she’s found another Jewish person to attack.

Very on brand for notorious Jew-hating bigot @IlhanMN to be smearing and attacking a Jewish man like Stephen Miller. https://t.co/v6h1vs5rZX

Did I miss anyone? It's a theme. There is a reason why Jews call her anti-Semitic.#IlhanOmar

You Omar are an Anti-Semite. https://t.co/g9wTsu7nEb

Over in Israel, Prime Minister Benjamin Netanyahu is seeking a fifth term as the nation’s leader. The polls are close. We’ll keep you updated on that.

Concerning dispatches from the liberal bubble, liberals are now openly admitting to misinforming Americans about the Trump tax cuts, in which 80-90 percent of Americans received tax relief. Even Bernie Sanders admitted this, and this will remain for the next decade. Vox’s Matt Yglesias wrote, “Nobody likes to give themselves credit for this kind of messaging success, but progressive groups did a really good job of convincing people that Trump raised their taxes when the facts say a clear majority got a tax cut.”

Nobody likes to give themselves credit for this kind of messaging success, but progressive groups did a really good job of convincing people that Trump raised their taxes when the facts say a clear majority got a tax cut. https://t.co/tcZFr8l9Ck

Storm sees China as a threat. They have a massive army, nuclear weapons, and a monstrous economy. Yes, they’re challenging the United States. This has been going on for quite some time, though this falls by the wayside due to the amount of Russia hysteria we’ve endured for the past two years. Now, there’s a fear that they could tap into the many underwater cables that provide cross-continental Internet to spy on American data and voice traffic. He explains more in the episode.

Justice Brett Kavanaugh is teaching a law course at George Mason University, though not for those students per se. It’s a trans-Atlantic course, though the student body is totally freaking out, saying his appointment threatens the mental health of the community. So far, GMU’s president, who Storm harbors immense hatred for, hasn’t buckled…yet.