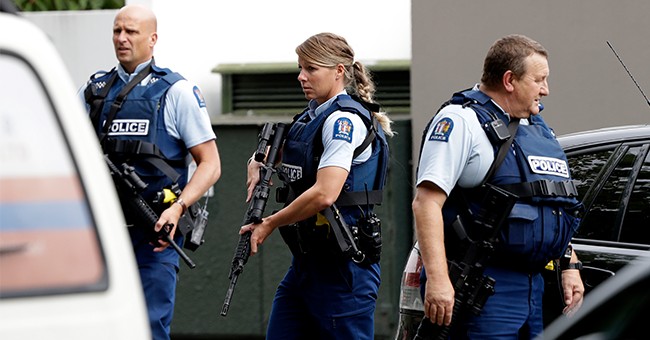 The minimum legal age to own a gun in New Zealand is 16, or 18 for military-style semi-automatic weapons. Anyone over those ages who is considered by police to be "fit and proper" can possess a firearm.

All gun-owners must have a licence, but most individual weapons don't have to be registered. New Zealand is one of the few countries where this is the case.

In order to own a gun legally, applicants for a firearm licence must pass a background check of criminal and medical records. Factors like mental health, addiction and domestic violence should be considered.

Once a licence has been issued, gun-owners can buy as many weapons as they want

New Zealand Attorney General David Parker gave the game away when he said a ban on semi-automatic firearms would be the most likely policy push. He later backtracked, but now it’s official. The government has banned "military-style" semiautomatic rifles. There is no wiggle room here, folks. It’s pretty much a gun confiscation program (via The Guardian) [emphasis mine]:

BREAKING: New Zealand prime minister announces sweeping gun law changes after mosque shooting. “In short, every semiautomatic weapon used in the terrorist attack on Friday will be banned in this country.” https://t.co/jpcSvS7rD7 pic.twitter.com/B2A2ImeSKH

Ardern says she anticipates broad support for these laws across the country, including New Zealanders who hold gun licences.

“In fact, I have had people unprompted tell me that they own guns and use them for legitimate purposes. Members of our rural communities and they support what we are doing.”

The press conference is still going on, but Ardern’s press team have sent over this Q&A:

1. What semi-automatic firearms will be affected by the ban?

The ban will apply to all firearms are now defined as Military Style Semi-Automatics (MSSAs) and will also include assault rifles.

2. What semi-automatic firearms will NOT be affected by the ban?

There is a balance to be struck between public safety and legitimate use. The changes exclude two general classes of firearms which are commonly used for hunting, pest control, stock management on farms, and duck shooting:

· Semi-automatic .22 calibre rimfire firearms with a magazine which holds no more than ten rounds

3. What semi-automatic firearms are affected by today’s Order in Council?

4. I have an A-Category firearms licence and now own MSSAs. What should I do?

It would normally be an offence for an A-Category licence holder to possess an MSSA, punishable by up to three years in prison or a $4000 fine. However a transitional period gives time for people to comply with the law, if they take certain steps. The transitional period will be confirmed next month. Firearms owners who unlawfully possess an MSSA now have three options:

· Voluntarily surrender the firearm to Police for safe disposal.

· Complete an online form on the Police website to arrange for the MSSA to be collected, while details are finalised for compensation under a buy back scheme

5. Are Police geared up to receive large numbers of MSSAs?

Yes. They will work with the New Zealand Defence Force to enable safe storage, transport and destruction of MSSAs. Police are establishing an online form which will make it easier for firearms owners to arrange for Police to collect the MSSAs. The online form will go live over the weekend. It will not be practicable for firearms owners to physically return their weapons to Police stations without prior approval. Where extra administrative staff are required they will be hired on fixed-term contracts.

6. Will this lead to stockpiling of semi-automatics?

No. The changes under the Order in Council take effect immediately. Anyone who now unlawfully has an MSSA, which yesterday was a lawful firearm, needs to take steps to comply with the law.

7. Will some firearms dealers be breaking the law if they have these MSSAs in stock?

Some firearms dealers only hold A-category licences. In order to comply with the law, they could sell their stock of semi-automatics to a Category E licence holder or return them to their supplier.

8. What are the statistics for firearms licences and firearms in circulation?

· There are 13,500 firearms which require the owner to have an E-Cat licence, this is effectively the known number of MSSAs before today’s changes

· The total number of firearms in New Zealand is estimated to be 1.2-1.5 million

9. What further issues are being considered?

Cabinet will consider further steps on 25 March. These will include measures to:

· Impose greater controls over a range of ammunition

· Address a number of other issues relevant to special interest groups such as international sports shooters and professional pest controllers, such as DoC.

10. How will the buyback work, and who will administer it?

Police, the Treasury and other agencies are working through the detail. More information will be available when the legislation is introduced next month. The compensation will be fair and reasonable based on firearm type, average prices and the age of firearms.

11. What is the cost of the buyback likely to be?

That is very difficult to judge, given the limited information about the total number of firearms affected by this change. Preliminary advice suggests it could be in the range of $100m-$200m. The buyback will ensure these weapons are taken out of circulation and that we fulfill our obligations under the law.

Prior to the announcement, some New Zealand gun owners were already turning in their firearms to authorities (via The Hill):

New Zealand police confirmed to the international news agency that at least 37 firearms had been handed over across the country as of Tuesday evening.

"Within 10 days of this horrific act of terrorism we will have announced reforms which will, I believe, make our community safer," Ardern said at a weekly Cabinet meeting on Monday.

She also emerged from the meeting encouraging others in New Zealand to hand in their firearms to police and advised people who are interested in purchasing a firearm to wait several days before doing so to gain more understanding on the country’s laws.

We shouldn’t be shocked that New Zealand is taking a page from their neighbor, Australia, who also enacted a policy of gun confiscation after the Port Arthur shooting in 1996. With this action by the Ardern government, you bet the anti-gun Left will be clamoring for the U.S. to do the same. Brace yourselves, folks. Idiotic gun control takes are coming.