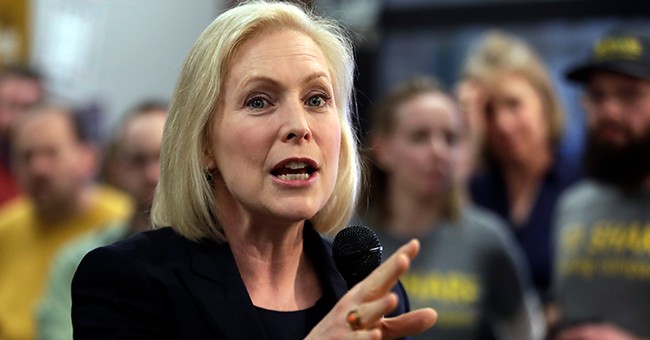 It’s not that they don’t know. I’m sure they do know by now. They have to, but for the sake of the narrative, they need to peddle straight garbage about firearms to get their base drummed up. At the same time, the Left could very well be that brain dead about firearms. The anti-gun Left doesn’t care about facts; they want to destroy our constitutional rights to individual gun ownership. For some, this plan is quite clear. To others, well, it’s just misdirected advocacy. Democrats care about saving lives, guys! Except that they don’t. If they did, they wouldn’t keep pushing so-called gun control policies that would do next to nothing to curb gun violence or prevent mass shootings. On top of that, they’re peddling straight fiction about the National Rifle Association, the Left’s favorite boogieman. Whether it’s complete ignorance or bad staff work, Sen. Kirsten Gillibrand (D-NY), a 2020 candidate, sure is working hard to capture the far left but also making sure everyone else knows that she’s just another brainless liberal who knows next to nothing about firearms.

Gillibrand: Because the gun manufacturers only care about gun sales...they want to oppose universal background checks because they want to sell an assault rifle to a teenager in a Walmart. Or to someone on the terror watch list or to someone who's gravely mentally ill... pic.twitter.com/dsZivAiL4q

A good resource on this is the Washington Free Beacon’s Stephen Gutowski, whose entire beat is about firearms. Gutowski took Gillibrand to the woodshed for spewing just straight nonsense in her anti-NRA rant. Julio Rosas at Mediaite quote tweeted the insanity where the New York Democrat said; “Because the gun manufacturers only care about gun sales...they want to oppose universal background checks because they want to sell an assault rifle to a teenager in a Walmart. Or to someone on the terror watch list or to someone who's gravely mentally ill...”

Senator Gillibrand giving a speach about gun control in C-SPAN right now and, I'm not exaggerating, everything she said was factually innacurate. She doesn't understand how the background check system works. Gets assault rifles wrong. Doesn't understand interstate gun sales.

She talks about needing universal background checks because gun manufacturers want to sell assault rifles, new sales of which were banned in 1986, to teens at Walmart, which is already required under federal law to conduct background checks on all gun sales.

Well, first of all, gun manufacturers don’t sell automatic rifles. They can’t. New sales were banned after 1986. Walmart already has to conduct background checks on all gun sales. And we all know that a push for universal background checks is nothing more than opening Pandora’s box to a gun registry. And do we really have to explain how constitutionally shady the terror watch list is, where there is no due process and where one can be denied his or her Second Amendment rights for merely being accused? That’s not how our system works. It’s just another day that ends in “y” when it comes to Democrats and firearms. And yes, knowing the terminology and the regulations matter, though Alexandria Ocasio-Cortez might disagree. Remember, we’re in the ‘we can lie as long as we’re morally right’ era of left-wing politics. Facts matter (what network has made this their anti-Trump war cry?) You need to know the law as president. It’s part of the job description.

Literally nothing that Gillibrand is saying here is correct in any way. https://t.co/HJpGq7NtpE

There is a reason why terminology is important: Existing law comes into play depending on that very terminology. If you truly care about the issue you’ll take the time to understand it and speak about it clearly and correctly.