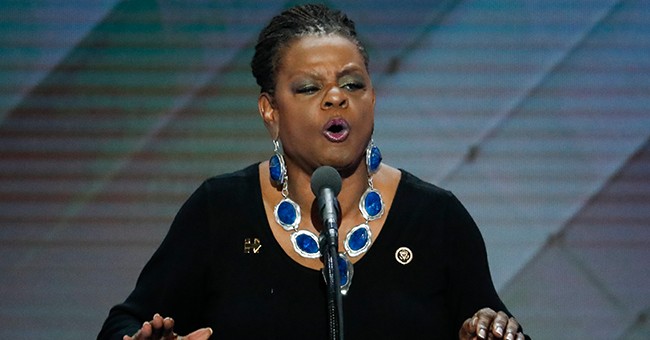 And how do some Democrats respond to all of this? Well, you saw it during the State of the Union this month. They just sat there, gurning at the camera. For Rep. Gwen Moore (D-WI), she summed up the excellent economic news for the country and minorities with these three words: “blah, blah, blah.”

Moore, an eight-term congresswoman, reacted to widespread prosperity across demographic lines by attempting to discredit them as short-term during a House Ways and Means Committee hearing. Moore referred to Republican Rep. Darin LaHood's statistics that show the economic situation is improving for African Americans, Hispanics, and the country as a whole, but she wasn't as enthusiastic about those numbers.

"My good friend and my good colleague Mr. LaHood waxed on about the health of the economy," she said. "GDP is great, unemployment is at an all-time low, African Americans are doing well, Hispanics are doing well, wages are rising at the fastest pace in ten years, blah, blah, blah."

She has long been a critic of the Republicans' tax reform legislation, although she repeated LaHood's figure that 90 percent of taxpayers saw their taxes cut.

Yeah, even Bernie Sanders admitted the same thing when the GOP tax bill was passed, and CBS News found three families from different racial and socioeconomic backgrounds to see how Trump’s bill will impact them: they all saved under the legislation. Trump and the GOP are cheerleaders for the country. Democrats only take that role when they’re in charge. And even then, they’re miserable. With their left-wing lurch, we’re increasingly seeing a major party in the U.S. exhibit a profound hatred for the country they call home. It’s disturbing, though whispers of it were present for decades. It’s now being blasted on loudspeakers.