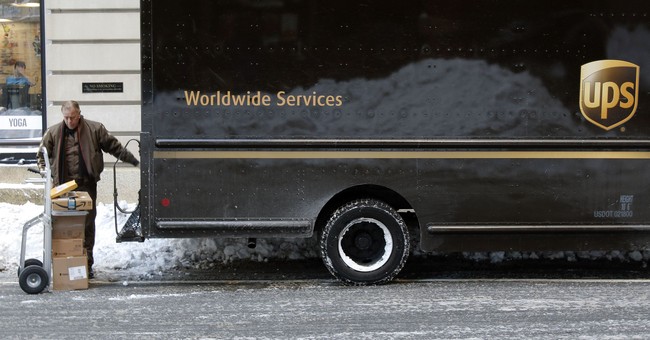 Some seasonal UPS workers in the Boston area worked over 40 hours a week during the holidays and received less than $15 total in their paychecks. It may sound like sweatshop labor. It isn’t. The local Teamsters chapter in the area virtually gobbled up every seasonal worker’s paycheck…because that’s what happens when you join a union. They’re scum. Sheila O’Malley of Charlestown told CBS Boston that she worked 41 hours one week, many of it during the nights, and only received $14.52 in total pay. She agreed to pay the Teamsters' $500 initiation fee in $32.00/week payments, but she was later told that this policy had been rescinded. Now, she and others have been sent scrambling financially, as the union sucked all of their hard earned money from their paychecks. The National Labor Relations Board is now investigating the local Teamsters chapter over their labor practices (via CBS Boston):

Sheila assumed it was a mistake and the money would be refunded. In part, because Sheila, like other thousands of other seasonal part time UPS workers, signed an agreement to pay the $500 Teamsters union initiation fee in $32.00 weekly installments. But UPS told her it wasn’t a mistake. A spokesperson for UPS told the I-Team, “Local 25 reversed this long standing practice by rescinding this policy.”

For the new hires, that meant the balance of the union initiation fees and dues would be deducted in one lump sum. For Sheila, that was $490.00- nearly her entire week’s pay.

“I cried and tried to plead my case with them. But there was no wiggle room. He [union representative] said ‘You’re a part of the union now and you won’t have to worry about that coming out of your check,’” she said.

Some employees tell WBZ the union blamed UPS for what happened. But all of this finger pointing doesn’t matter to Sheila and the thousands of others who were left with little or no money.

“Financially it was crippling. It seemed like a few hundred dollars but that money was already spent and then we didn’t have it,” she said.

“I thought they were supposed to protect our rights,” Sheila told CBS Boston. She thought the union was there to ensure a fair wage was distributed for their work. That’s not what unions are for anymore, as many of you already know. They’re just war chests and political arms for their allies in the Democratic Party.