Uh, No: NYT Gives Props To This Islamic Terror Group...Because They Help Out With Christmas In Lebanon 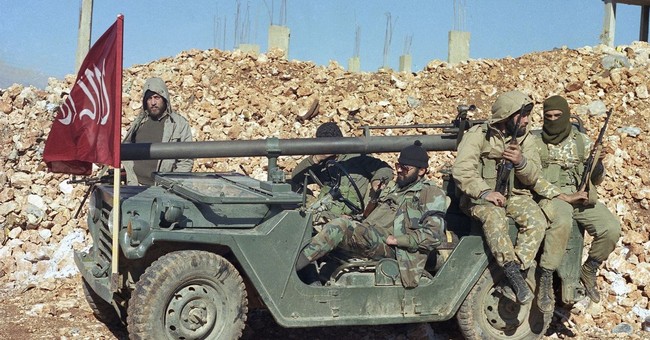 The New York Times is getting in on the troll bait games, publishing his trash article about how Hezbollah helps out with the Christmas festivities in Lebanon. Oh wait; they’ve imported a Santa Claus in the past. Well, I guess they’re okay guys then, right? Hell no! Honestly, what the hell is this?

Nothing says “Merry Christmas!” like terrorist apologism in the New York Times. https://t.co/5uEniNyEJr

The Iranian cultural attaché stepped up to the microphone on a stage flanked by banners bearing the faces of Iran’s two foremost religious authorities: Ayatollah Khomeini, founder of the Islamic Republic, and Ayatollah Khamenei, the current supreme leader.

“Today, we’re celebrating the birth of Christ,” the cultural attaché, Mohamed Mehdi Shari’tamdar, announced into the microphone, “and also the 40th anniversary of the Islamic Revolution.”

“Hallelujah!” boomed another speaker, Elias Hachem, reciting a poem he had written for the event. “Jesus the savior is born. The king of peace, the son of Mary. He frees the slaves. He heals. The angels protect him. The Bible and the Quran embrace.”

The mufti, Ahmed Kabalan, went on to engage in some novel religious and political thinking: Christians and Muslims, he said, “are one family, against corruption, with social justice, against authority, against Israel, with the Lebanese Army and with the resistance.”

Even Hezbollah, the Shiite political movement and militia that the United States has branded a terrorist organization, has helped ring in the season.

In previous years, it imported a Santa to Beirut’s southern suburbs to distribute gifts. On Saturday, Hezbollah representatives were on hand for the Iranian Christmas concert, an event that also featured handicrafts by Iranian artists, but the organization skipped Santa this year because of financial constraints.

These demonstrations of Christmas spirit seem intended, analysts said, to demonstrate Hezbollah’s inclusivity as a major political and military force in Lebanese society and to highlight its political alliances with Christian parties.

Right, and the liberal media is the one who hoots and hollers that Trump is being played by North Korea over denuclearization, though they’re totally sold on how some piece of trash terrorist organization is acting…”inclusive” when not preaching about killing the infidels for a few weeks. Guys! They imported a Santa. All sins are wiped clean, said by no one who is serious. I mean, good Lord. Anyways, I’ve got to get back to the family, but you just have to read the responses to this story, preferably after you’ve had a few glasses of eggnog or straight bourbon.

Even Hezbollah, the Shiite political movement and militia that the United States has branded a terrorist organization, has helped ring in the season in previous years, importing a Santa to Beirut’s southern suburbs to distribute gifts. https://t.co/JTbtAgghQ3