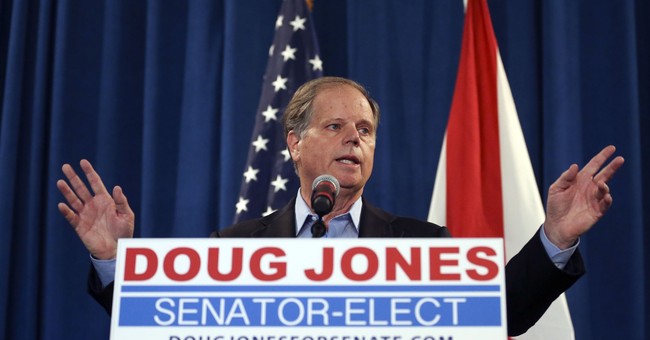 Oh, so while the Left is going insane over Russian interference during the 2016 elections, they also decided to allegedly copy their deceptive social media practices during a special election in Alabama. Then-Sen. Jeff Sessions resigned to become attorney general, so it was Republican Roy Moore and Democrat Doug Jones duking it out. Moore was hit with multiple allegations of inappropriate sexual behavior from multiple women. The alleged incidents occurred when they were minors. With these allegations, and the fact that Moore is not that good of a candidate, the Democrats were able to pull out a win. They should live it up. Barring nominating a lizard person or someone abjectly insane, Jones should be booted in 2020. Yet, during the campaign, it seems a group of Democratic operatives ran a deep cover deception campaign using Facebook and Twitter. They holler and whine about Russia…only to adopt their tactics. Was it impactful? Doubtful. Like the Russians, they didn’t spend a lot of money, $100,000 out of a $51 million special senate election. But alas, that’s not the point.

It’s one thing to point out that Russia interference bad. There’s no evidence to suggest it was a coordinated effort between the Kremlin and the Trump campaign, and that it didn’t rock the institutions of this country the way the Left is screaming about. If a social media campaign with a similar budget was able to truly damage our country in the way liberal CNN is suggesting, then it proves that a) liberals have very little faith in this country (no shocker); and b) and probably more to the point—these people can’t stand losing. It’s as if they feel entitled to election wins; Newt Gingrich aptly noted that during the 2018 gubernatorial election in Georgia. Also, we’re no angels in this front either. We’ve also interfered in other nations’ elections, especially during the Cold War. The Obama administration arguable interfered in the 2015 Israeli elections in an effort to boot Benjamin Netanyahu.

It’s a completely other thing to say Russian interference is the worst attack since Pearl Harbor, Trump caused it, but also let’s totally copy what they did so we can screw over Republicans in the future. This was a possible test run. So, once again, Democrats show they’re the cancers to this country. And if there were no double standards, Democrats wouldn’t have any. The shadow campaign consisted of a Facebook page, where fake conservatives sought to divide Alabama Republicans. The New York Timesadded that there is no evidence Mr. Jones directed or knew about this covert operation (via NYT):

As Russia’s online election machinations came to light last year, a group of Democratic tech experts decided to try out similarly deceptive tactics in the fiercely contested Alabama Senate race, according to people familiar with the effort and a report on its results.

The secret project, carried out on Facebook and Twitter, was likely too small to have a significant effect on the race, in which the Democratic candidate it was designed to help, Doug Jones, edged out the Republican, Roy S. Moore. But it was a sign that American political operatives of both parties have paid close attention to the Russian methods, which some fear may come to taint elections in the United States.

One participant in the Alabama project, Jonathon Morgan, is the chief executive of New Knowledge, a small cyber security firm that wrote a scathing account of Russia’s social media operations in the 2016 election that was released this week by the Senate Intelligence Committee.

An internal report on the Alabama effort, obtained by The New York Times, says explicitly that it “experimented with many of the tactics now understood to have influenced the 2016 elections.”

The project’s operators created a Facebook page on which they posed as conservative Alabamians, using it to try to divide Republicans and even to endorse a write-in candidate to draw votes from Mr. Moore. It involved a scheme to link the Moore campaign to thousands of Russian accounts that suddenly began following the Republican candidate on Twitter, a development that drew national media attention.

There is no evidence that Mr. Jones sanctioned or was even aware of the social media project. Joe Trippi, a seasoned Democratic operative who served as a top adviser to the Jones campaign, said he had noticed the Russian bot swarm suddenly following Mr. Moore on Twitter. But he said it was impossible that a $100,000 operation had an impact on the race.

Russia may still be our biggest geopolitical foe—China is also coming up on the rearview mirror—but the biggest threat to freedom will always come from within, and that’s the Democratic Party.

This is not to say that the Russian interference campaign was a nothing burger. It's certainly not good, and its impact has been way, way overblown, namely because it had zero impact on the election. It's the same with this Democratic test run of Russian-like tactics in this Alabama race, but it's never a bad day to point out how the media has become stupidly engulfed in a new red scare, and that Democrats are, and will always be, hypocrites to the end.

Facebook sharing private messages without users' knowledge or consent seems a lot more egregious than whether it allowed Russians to purchase some goofy ads, but that's just me https://t.co/PcsITDqfX2 pic.twitter.com/3kxAEqjpQW

It's far more likely that the Russians were just throwing a bunch of shit at the wall and seeing what stuck and that basing it on Cambridge Analytica data wouldn't have been meaningfully more effective than doing it at random. https://t.co/6NZkf5s1Ww

If you wrote out a list of the most important factors in the 2016 election, I'm not sure that Russian social media memes would be among the top 100. The scale was quite small and there's not much evidence that they were effective.

If, as Nate Silver argues, Russian social media activity wasn’t even among the top 100 most important factors in the 2016 election, what does it say that political/media class emphasis on this issue has been so unwavering and relentless, now more than two years later?

UPDATE: Oh, Democrats might have tried this same crap in North Dakota? Well, it figures. Heidi Heitkamp needed anything she could get to survive, and even that couldn’t save her. Rob Port, a North Dakota-based blogger, has more:

…the tactic was to disseminate false information to damage the Demcorats’ political opponent and suppress voters.

Which sounds remarkably similar to what North Dakota Democrats attempted to do on Facebook earlier this year.

In late October/early November the North Dakota Democratic party created a Facebook page for a phony baloney group called “Hunter Alert,” complete with a logo. That page then disseminated messaging (which the Democrats paid to promote) suggesting that hunters who voted might be putting their out-of-state licenses at risk.

After I broke a story about this effort, Senator Heidi Heitkamp defended the actions of her state party. “It is really important people understand the consequences of voting,” she said in response to a question about them.

Facebook itself, battered of late by accusations claiming they facilitate electoral meddling, ultimately pulled the ads.

Back to the New York Times report, if Democrats were dabbling in these tactics in Alabama, could this ad in North Dakota have been part of the same effort?