GA GOV: Newt Gingrich On Sore Loser Democrats: ‘It’s Almost As If They Believe They Have A Divine Right To Win’ 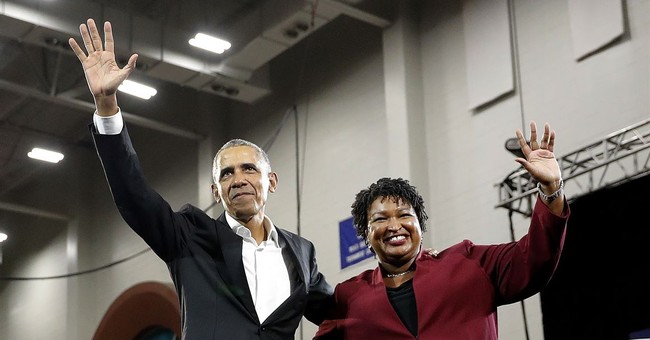 Democrats have short memories. That can be the only explanation for their shoddy, immature, and ultimately laughable assertion that the Georgia gubernatorial election was stolen from them. Democrat Stacey Abrams acknowledged her defeat after a prolonged legal battle showed that she would be unable to trigger a recount or a runoff, as Republican Brian Kemp maintained his two-point lead (50/48). Granted, she admitted defeat, she did not technically concede. She feels that the election was illegitimate, and refuses to call Kemp a legitimate governor. Here’s what she said last Sunday (via WaPo):

As the Associated Press called the Georgia governor’s race for Georgia Secretary of State Brian Kemp on Sunday, CNN’s Jake Tapper was asking his opponent whether she felt the victor was “the legitimate governor-elect."

Abrams, who had hoped to force a runoff with Kemp but conceded the race on Friday, pivoted to her concerns about irregularities, voter suppression and a last-minute investigation during her campaign for her state’s highest office. During the race, she had accused Kemp of actions antithetical to democracy: making it harder and in some cases impossible for certain groups of Georgians to vote.

So, with Abrams admitting Kemp was the winner, Tapper pressed during her first national interview since the election. He wanted to know whether she thought Kemp had a legitimate claim on the office, even as other Democrats publicly stated that the race had been stolen.

The law as it stands says that he received an adequate number of votes to become the governor of Georgia,” Abrams said. “But we know sometimes the law does not do what it should, and something being legal does not make it right.

“Yes, when he takes the oath of office, he will be the legal governor of the state of Georgia,” Abrams continued, using another L-word. “But what you are looking for me to say is there was no compromise of our democracy and there should be some political compromise in the language that I use, and that’s not right. What’s not right is saying that something was done properly when it was not.

“ … Will I say that his election was not tainted, was not a disinvestment and a disenfranchisement of thousands of voters? I will not say that."

Again, there’s an issue by saying she conceded. This is what she said during her speech admitting defeat:

This is not a speech of concession, because concession means to acknowledge an action is right, true, or proper. As a woman of conscience and faith, I cannot concede that. But my assessment is the law currently allows no further viable remedy. Now, I can certainly bring a new case to keep this one contest alive, but I don’t want to hold public office if I need to scheme my way into the post. Because the title of governor isn’t nearly as important as our shared title — voters. And that is why we fight on."

Viva la resistance! Remember when Democrat said challenging the results of an election was dangerous and a possible threat to our republican values? Well, like clockwork, that rule only applies to Republicans, not to mention there is zero evidence that this election was stolen, despite what Sens. Sherrod Brown (D-OH) or Cory Booker (D-NJ) say. Hillary Clinton chimed in too, saying Abrams would have won a fair election. Georgia is a red state. It has a Republican legislature. Trump won it in 2016. Oh, Brian Kemp, who was secretary of state, purged 600,000 voters, you say? Wrong. That use it or lose it law was signed into law by a Democratic governor, Zell Miller, and a Democratic legislature. And the allegation that the Kemp camp screwed over voter precincts because they took power cords is just absurd. Philip Wegmann at The Washington Examiner has more, specifically how these 600,000 voters, who hadn’t voted in the last three elections, were given more than enough time and options to reactivate their registrations:

So what are these insidious measures? And what is the evidence that Kemp stole the election? Mostly wild allegations pushed by Democrats and lapped up by the national media, casting doubt on an election that didn’t go their way.

Because Kemp was Georgia's secretary of state, each of the arguments go in one form of the other, Kemp is guilty of everything that went wrong leading up to and on election day.

Voter rolls were purged, they argue, in order to disenfranchise minority voters.

Kemp did in fact do the purging in question. American Public Media reported that nearly 600,000 Georgians were removed from the rolls in 2017 by the secretary of state’s office. But this isn’t a conspiracy. This was the result of a “use it or lose it” bill signed by a Democratic governor, Zell Miller, and passed by a Democratic legislature in 1997.

The 600,000 removed from the rolls were removed because they hadn’t voted in the last three elections. Voters don’t get tossed without warning, though, as Michael Warren of The Weekly Standard reported earlier in October. If they haven't moved out of state, then they are notified. Each voter is given a menu of options to reactivate his registration, and up to four years to complete this process.

Granted, 600,000 is a high number to purge. Again, Warren reported, the increase resulted from a failed lawsuit over alleged racial bias by the group Common Cause and the NAACP. Georgia won the case at the Supreme Court, allowing the dead, the convicted, and former residents who had moved away to be removed from the rolls. Suppression? Hardly.

What about the polling places that were closed? Surely it was a sinister effort by Kemp to lengthen lines and keep people from voting.

Well, no. There were delays, yes. There have been 214 precincts closed since 2012, according to an analysis by the Atlanta Journal-Constitution. But Kemp had absolutely nothing to do with closing a single polling place. Those offices were shuttered by county election officials, not the secretary of state.

Finally, and laughably, there were delays caused by voting machines without power cords. As of this writing, there is no sign that Kemp or any of his allies snuck into polling stations and stole extension cords. If there was any evidence of this, the Republican should not be governor. Not just because this would be illegal, but because only an idiot would try to steal an election by stealing a charge cord.

So, besides Democrats being terrible people, what else could explain the epic meltdowns and sore loser syndrome that infests the Left whenever they lose elections, which often times happens in this country of ours.  Former House Speaker and 2012 presidential candidate Newt Gingrich has a theory. They think its their divine right to win (via Washington Times):

…Republicans didn’t issue similar claims of illegitimacy when Barack Obama won the White House, despite activists from the liberal group ACORN being convicted for voter registration fraud or election fraud in such states as Florida, Nevada, Pennsylvania, Washington and Wisconsin.

“You have a Democrat Party that has a long history of stealing [elections] whose defense is to attack everybody else,” said former House Speaker Newt Gingrich, a Republican who represented Georgia. “It’s a strategy.”

Mr. Gingrich argued that Democrats these days present themselves as presumed winners, whether in a swing state like Florida or a red state like Texas, with the angle of thus being able to challenge any election result that does not go their way.

“It’s almost as if they believe they have a divine right to win. So if they lose in Georgia or they lose in Alabama it must have been stolen,” he said.

Richard E. Vatz, a scholar of political rhetoric at Towson University, said the accusations of election fraud are escalating, in part, because of the intensified political polarization of the country in the Trump era.

But it’s not entirely new and it’s not all hot air, he said.

“Elections actually have a long history of cheating, according to who has the power to count the votes,” said the professor. “In the close 1960 election, many, including yours truly, believe that Democratic votes of Texas and Illinois were illegally added to ensure Kennedy’s victory.”

After falling short in the vote tally last week, despite 10 days of counting and her lawsuits to include previously rejected ballots, Ms. Abrams said she lost but would not concede because the outcome was not “right, true or proper.”

She called Mr. Kemp the “architect of voter suppression” that secured an ill-gotten win, even though, despite being Georgia’s secretary of state, almost all the specific actions that she complained about were either mandated by state law or the work of county election boards.

Yes, Trump has lobbed similar allegations without evidence. So what? At this point, with the appalling double-standards from Democrats and the media, this nonsense will go on for two reasons a) because any time Trump says this CNN and company goes haywire, and nothing brings me more joy that MSNBC-ville going postal over this; b) as long as the media tolerates unsubstantiated and evidence-lacking allegations from Democrats about stolen elections (looking at you Ms. Abrams), then let the Wild West mentality continue. Sorry, this ‘they can do it, but you can’t’ nonsense ended the day Trump was elected. Is it a degradation of standards and consistency? Some might see that, in fact, it is, but if both sides aren’t held to account equally, what standard was there to begin with?

Frankly, I’m over this. Kemp won and Abrams lost. She lost by 55,000 votes. Let’s say this was true, and the Georgia election was “stolen.” That’s massive voter fraud. That’s a huge national story. Someone doctored up 55,000 votes…and didn’t get caught. Voter fraud is something that Democrats say doesn’t happen or dismiss as a legitimate issue. It doesn’t negate the fact that it does happen. It may not be extensive to the point where elections can be potentially tilted, but it happens. At least Republicans admit it occurs. Democrats have experienced whiplash. After years of saying voter fraud is a non-issue, it’s not one of national concern because they lost an election in a Republican state, where most of the allegations are centered on past action by…Democrats and local county election officials. They’re just sore losers. So, what is it? Voter fraud is real or a nothingburger. A part of me is a little envious of Democrats. The world is their oyster every day. They can think and dream up some incredible bull crap any day of the week. Then again, what would you expect from a band of terrible, unpatriotic socialists.

“Frankly the evidence is not there” @NoahCRothman on Stacey Abrams claims that the Ga. election was illegitimate. #uppers pic.twitter.com/GdyGgxb687