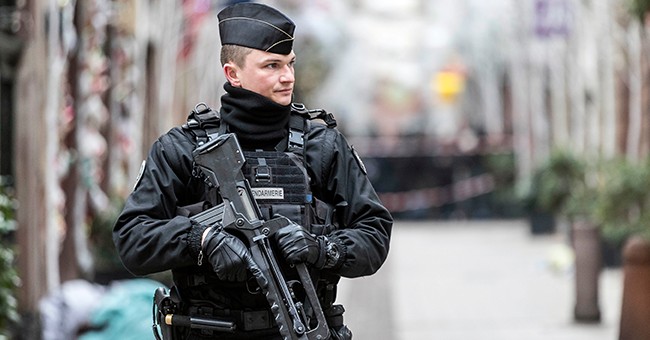 There is a manhunt underway in France after a terrorist opened fire at a Christmas market in Strasbourg. Three people were killed and several others were injured. Early reports noted that the French police had a suspect, but did not release his name or photo. We did know that he was a person on a radicalization list. Now, we have his name:Cherif Chekatt. He’s 29-years-old—and he reportedly yelled, “Allahu akbar” before he committed this heinous act of radical Islamic terrorism. He remains at large and French authorities now say he could have slipped into Germany (via Fox News):

Though no groups have claimed responsibility for the attack, Islamic terrorists have a history of plotting assaults at Christmas markets — including one disrupted plot in which nearly a dozen militants sought to bomb the Strasbourg market around the millennium.

Chekatt escaped from the scene in a taxi, bizarrely bragging to the driver about being injured in a firefight with soldiers after killing 10 people, officials said.

A wide-scale manhunt was underway near Strasbourg as the French government raised the security level and sent police reinforcements to the city, located about 305 miles east of Paris. But a top French official admitted Chekatt may no longer be in the city and could have slipped through the police dragnet into neighboring Germany, where he'd spent time in prison.

Nunez said Chekatt had been radicalized in prison and was being monitored by French intelligence services since at least 2015 due to his suspected religious extremism.

Chekatt has a long rap sheet dotted with dozens of convictions across Europe. French prosecutors were quick to declare the shooting an act of terrorism yesterday (via WaPo):

“Once again, terrorism has struck our territory, in Strasbourg,” said Paris Prosecutor Rémy Heitz, whose office leads terrorism investigations across the country.

He noted that the suspect had 27 criminal convictions in France, Germany and Switzerland. He said two people were killed outright, while a third was left in a vegetative state. The attack also wounded 13 others, eight of whom are in critical condition.

Earlier Wednesday, a top Interior Ministry official, Laurent Nunez, said that police went to the suspect’s home on the morning of the attack to arrest him in connection with an attempted murder but that he was not there.

Nunez said the suspect became radicalized during one of his many stints in prison and was known to security services. He was last released from French prison in 2015, but German authorities say he was then arrested and imprisoned for theft across the border before being deported to France in 2017.

On Tuesday night, the attacker sprayed gunfire into the Strasbourg Christmas market, the largest in France. He then exchanged fire with police and soldiers protecting the market, wounding one soldier lightly and getting shot in the hand himself.