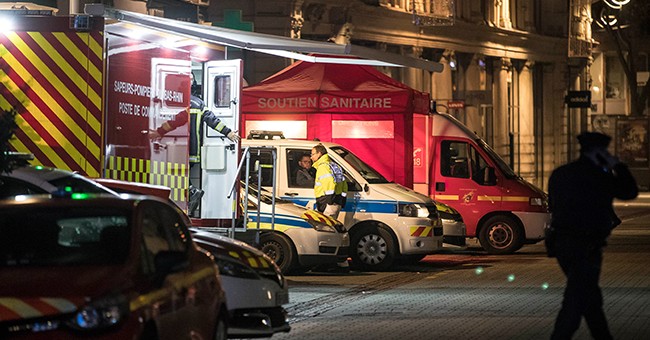 We have reports of a shooting at a Christmas market in France. The attack occurred in Strasbourg. It’s been described as a “serious security event.” One person is reported dead (via The Guardian):

One person has been killed and three injured in a shooting in Strasbourg, according to emergency workers in France.

The local fire department said that several shots had been fired on Tuesday evening in the centre of the city, on the German border.

One source told Reuters that the shooting took place near the city’s iconic Christmas market.

The interior minstry described the incident as a “serious security event” and warned the public to stay indoors.

BREAKING NEWS: Multiple shots have been fired near a Christmas Market in central #Strasbourg, France in possible attack. Footage shows panic and at least one victim on the street. There are conflicting reports. Not much confirmed yet.
DEVELOPING.., pic.twitter.com/1Gj26tEthY

BREAKING: Picture possibly shows two victims laying on the ground after reports of shots fired near a Christmas Market in central Strasbourg, France.
BNL is closely monitoring the situation. pic.twitter.com/Nh3ahETouo

BREAKING NEWS: At least one person dead, multiple others are injured following shooting at Strasbourg Christmas Market in France.
Developing...

BREAKING NEWS: Franceinfo reports that the gunman or gunmen fled after shooting numerous people at a Christmas Market in central Strasbourg, France. The European Parliament has been placed on lockdown. Major asks people to stay home and avoid the city center.
Developing...

UPDATE: One person executed the attack, which has been described as a terrorist attack. Two are dead, with another eleven injured. The terrorist is still on the run, but has been identified by French police [emphasis mine]:

A gunman is reportedly on the run in Strasbourg after shooting two people dead and injuring at least 11 others in a terrorist attack near the city’s celebrated Christmas market.

Police said the lone gunman had struck in different places around the city centre just before 8pm where the market, which attracts millions of tourists every year, is taking place.

Witnesses said he had fired a first series of rounds near the market around 8pm then a second round a few metres further on.

“There were gunshots and people running everywhere,” one local shopkeeper told BFM TV. “It lasted about 10 minutes.”

Two of the injured were said to be in a critical condition.

The public prosecutor declared the incident to be “terrorism” and announced an inquiry had been opened into “assassination and attempted assassination”.

France’s interior minister, Christophe Castaner, said the gunman “has been identified” and was known to police who were searching for him.

UPDATE II: At least three dead, according to Washington Post:

At least four people were killed and eight people wounded Tuesday evening in a shooting near a Christmas market in Strasbourg, France, according to the Associated Press, which cited police union officials.

The 29-year-old French suspect was on a list of people suspected of radicalization, they said.

The city center was locked down as authorities tried to locate the assailant, whose gunfire produced panic in the eastern French city that hosts the country’s largest Christmas market. The European Parliament — which was holding meetings at the time of the shooting — also went into immediate lockdown.

The Paris prosecutor’s office, which oversees terrorism investigations for all of France, announced late Tuesday that it had opened an inquiry, while the prosecutor himself headed to Strasbourg.