It's Official: Dick's Sporting Goods Says Business Is Declining Because Of Their Pro-Gun Control Nonsense 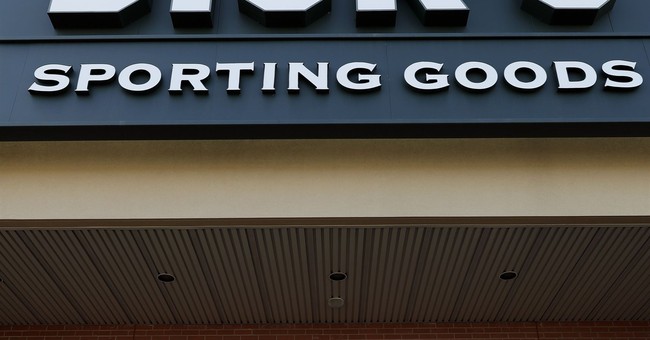 Our good friend Stephen Gutowski mentioned this on Triggered last week. Dick’s Sporting Goods had finally admitted that their gun control antics have hurt their business. They’re not concerned; they’re going to re-conceptualize and take firearms out of ten of their locations despite sales dropping nearly four percent. Nevertheless, they admitted that catering to the Everytown crowd has hurt foot traffic, but insist profitability is still up (via Free Beacon):

Dick's Sporting Goods told investors during the Goldman Sachs Retailing Conference that its gun-control stance hurt sales of its hunting business, outdoors business, and that it may close its outdoor-focused Field & Stream stores.

Edward Stack, chairman and CEO of Dick's, said during the event that the sporting goods chain's recent 3.9 percent drop in same-store sales was the result of a mix of factors beyond their control as well as some he called "self-imposed." Specifically, he said, "the decisions we made on firearms" negatively affected their bottom line but the drop in sales was something they expected. They did not, however, regret their decision to change a number of their gun-sales policies and back new gun-control legislation.

"Well I think it's definitely a factor, and it's nothing that we didn't anticipate," Stack said during the call. "As we put out kind of our guidance for the year and our earnings guidance for the year, we knew this would happen when—we've made some decisions on firearms in the past and we've had a pretty good idea of what these consequences were going to be. We felt that was absolutely the right thing to do. We would do the same thing again if we had a mulligan, so to speak, to do it again."

The company insisted during the earnings call that while their embrace of gun-control policies was hurting store foot traffic as well as their hunting and outdoors business, they've found ways to offset the losses.

"Has it had an impact on the foot traffic and people who were upset with us on this? Yes," Stack said. "Has it impacted our profitability? No. We found ways to offset that. We're taking 10 stores this fall and taking firearms out of all of those 10 stores and reconceptualizing the footprint, the product mix, and we'll find out—we'll have a sense of what happens if we took that out.

Gutowski also detailed that Dick’s descent into gun control-ville, which started when they decided to nix the sale of AR-15 rifles. We’ll see what happens. Truth be told, if you’re looking for gear for sports or working out, I’m not one to hurl tomatoes at people who shop at Dick’s; I’m also not fond of boycotts. That’s something liberals do for reasons for more ridiculous as well. If Dick’s wants to crap all over its Second Amendment and hunting customer bases, that’s fine. Let the market work itself out—and it usually does. Someone will find a way to capture this slice of the pie that Dick’s doesn’t want to eat.

Editor's Note: Tweaked the headline...I may have gone a bit far the first time.

Madeline Leesman
Libs of Tik Tok Kicked Off Instagram
Madeline Leesman
News Report Baselessly Fear Mongers How Easy It Is to Buy a Firearm: 'Like Ordering Groceries'
Julio Rosas
We Know Why Police Didn't Breach the Classroom to Confront Texas Shooter...And They Admit It Was a Mistake
Matt Vespa
CARTOONS | Michael Ramirez
View Cartoon
Most Popular