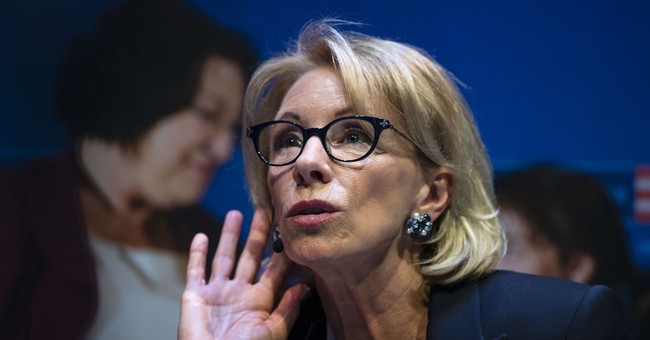 Lara Bazelon is the director of the criminal juvenile justice and racial justice clinics at the University of San Francisco School of Law. She also could become the next name on the Left’s public enemies list for suggesting that—gasp—Education Secretary Betsy DeVos is right for reforming Title IX. Her reasons are grounded in what many critics of the Obama system have said over the past couple of years: the lack of due process. She also said there are “troubling racial dynamics” as well. She explains in an op-ed she wrote for The New York Times:

Consider this scenario: A young black man enrolls at a state university in California on an athletic scholarship. He’s the first person in his family to go to college. His teammate’s white ex-girlfriend matches with him on Tinder, comes to his apartment, has sex with him and, they both agree, returns three days later to have consensual sex.

Weeks later, the young woman, who has reconciled with her boyfriend, claims the Tinder match raped her during the first sexual encounter. The Tinder Match adamantly denies this. Her boyfriend, who is also black, says she is lying. There is no hearing, no chance for the accused to ask her questions.

But the Title IX investigator concludes that he committed sexual assault by finding her more credible than him under the preponderance-of-the-evidence standard, under which the accuser must prove there is a greater than 50 percent chance her claim is true. He’s one of a few black students on campus and worries he may get killed after word spreads.

This happened in early 2018 to a client in the pro bono clinic I direct with my law students. We represent low-income students of color in California who face expulsion based on allegations of sexual assault.

The current system of adjudicating sexual assault complaints is broken. Under the rules set up by the Obama administration, hundreds of colleges, including many in California, were placed under federal investigation and threatened with the loss of funding for failing to adequately investigate sexual assault complaints. The definition of what constituted an assault was vastly expanded. Nonpunitive resolutions such as mediation were forbidden, even if that is what both sides wanted.

The Obama rules were written to address a real problem: a tendency by colleges to sweep sexual assault allegations under the rug. But it also gave risk-averse schools incentives to expel the accused without any reliable fact-finding process.

We can fix this. The DeVos reforms are in their public comment period, which gives people on all sides of this debate a chance to weigh in. That is a good thing. I know my allies on the left will criticize my position, but we cannot allow our political divisions to blind us to the fact that we are taking away students’ ability to get an education without a semblance of due process.

Bazelon is not alone. Emily Yoffe has written extensively about how college campuses have run amok, trampling the rights of the accused, and establishing systems that are unfair. Articles on other prominent liberal publications, like Slate, have also noted that the lack of due process on college campuses is an issue. Granted, they also say the approach DeVos takes isn’t without its flaws, but it’s a step towards righting the ship.

As you can imagine, the reaction to DeVos’ reforms have been insane, with the Hollywood Left calling her the Grinch and other progressives viewing the changes as giving cover to accused rapists. The Left finds due process to be problematic.