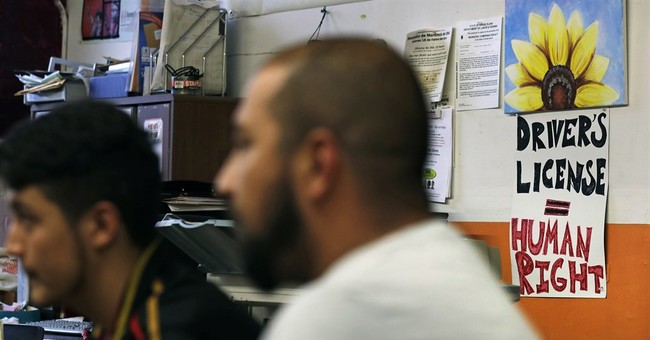 So, in typical blue state fashion, New Jersey is mulling giving illegals driver’s licenses. The state has a new liberal governor. And yes, he’s insufferable like the rest of his party. Gov. Phil Murphy supports the idea, which has been in motion for a while now. Top Democrat Steve Sweeney, who helms the State Senate, also supports the measure. And now, it could soon become a reality (via Star-Ledger):

Undocumented immigrants are already driving on New Jersey's roads, so why not give them a chance to get a driver's license so they can insure and register their vehicles?

That's the viewpoint of a handful of state legislators who on Tuesday announced they have introduced a bill that would let undocumented immigrants apply for a license. They argue it'll make the state's roadways safer for everybody and support the Garden State economy.

"We can't ignore the reality that undocumented immigrants are on the roads now, going to work, driving their children to school and doing the routine activities that all families do," said state Sen. Joseph Vitale, one of the bill's sponsors.

"If they don't have a driver's license, don't have insurance and are driving a vehicle that isn't registered, it creates a hazard on the road," Vitale, D-Middlesex, said.

Similar legislation has already been introduced. But the new bill (A4743/S3229) is tied to a separate measure that affects every New Jerseyan who already has a license and who boards a flight for vacation or work.

In addition to allowing undocumented immigrants to obtain a "standard license," the measure would create a federally-compliant Real ID license. Federal officials will only accept Garden State licenses at airports for another year.

"There are countless undocumented immigrants who pay taxes and go to work every day in New Jersey," state Sen. Teresa Ruiz said in support of the bill.

"Many rely heavily on public transportation, but others take the risk of driving, despite not having access to drivers' licenses," Ruiz, D-Essex, said. "Offering undocumented immigrants a pathway to a legal drivers' license would reduce their chances of encountering legal troubles while trying to make a living, while also making the roads safer for all New Jerseyans."

It’s the twilight zone with these people. They want to give illegals driver’s licenses out of safety concerns. Uh, they shouldn’t be here—and government shouldn’t be making life easier for people who have broken federal immigration laws. It just shows that this party cannot be trusted when it comes to immigration enforcement. It’s pathetic. This how Democrats look at the problem: ‘the illegals are here and they pay taxes, so we’ll just treat them like de facto citizens.’ Hell no.

It’s an easing into amnesty. If you’re here illegally, you go. Period. Yes, I know New Jersey has adopted so-called sanctuary state rules concerning local law enforcement’s cooperation with federal immigration authorities. That’s fine. Immigration and Customs Enforcement just announced they would increase raids in the state. And I hope they do. Also, here’s your friendly reminder that we need the border wall, but you already know that.

We'll see if these bills go through. Given how Democrats control everything now, I wouldn't be shocked, especially the Left's addiction to trying to stick it to Trump, which often times backfires in hilarious fashion.