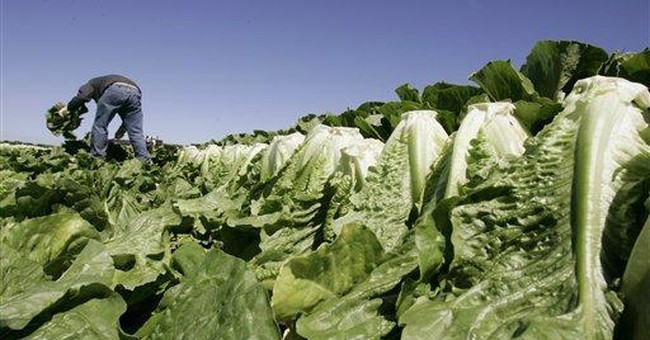 When it comes to inane hot takes on social issue, the Left never fails, and neither do their publications that peddle drivel on a daily basis. Yet, while Russian collusion hysteria has taken over the left wing blogosphere, anti-gun hot takes will always rise to the top. Right now, we’re being told by the CDC to stay the hell away from romaine lettuce. The warnings are pervasive, with health updates, breaking news alerts, and the blaring sirens: don’t eat romaine. Over at the left wing Think Progress, they’re wondering why there aren’t any such updates about gun violence. Yeah, it’s comes to this: health updates about salad being twisted into some anti-gun screed:

On Thanksgiving Day 2018, Americans couldn’t buy romaine lettuce because of a CDC recall linked to an E. Coli outbreak. But even though gun violence is so mundane that a shooting at a mall in Alabama Thursday evening barely made national news, guns were still freely available at stores like Walmart across the country.

The Centers for Disease Control issued a food safety alert on Tuesday afternoon, urging Americans to refrain from eating, and retailers from selling, any romaine lettuce, “until we learn more about the outbreak.” Five people died from an E. coli outbreak in June, and nearly two hundred people got sick.

Food safety is certainly an important thing to get right, but the number of Americans who die from foodborne illness every year — 3,000 according to the CDC — is dwarfed by the 30,000-plus annual fatalities caused by guns in America.

Every day in America, 96 people are killed by guns and hundreds more are injured, according to Everytown for Gun Safety. It’s not something that has to happen. America’s gun homicide rate is 25 times higher than that of other high-income countries.

Well, first, Everytown was cited, so you know the data is predicated on shoddy statistics. How shoddy? Even The Washington Post called their school-shooting figure for 2018 “flat wrong.” In 2015, the group’s claim that there’s been a school shooting every week since Sandy Hook was given four Pinocchios. In other words, not only is the data point straight trash; it’s totally false. Any paper with Everytown’s research has more utility wiping your rear end or cleaning up a kitchen spill than being cited in a serious discussion. Also, as some have already noted (mockingly), like Erielle Davidson, eating lettuce is not a constitutional right. So, this argument was another instance of the anti-gun Left getting hit in the mouth with the belt buckle.

But romaine lettuce is in the Bill of Rights. https://t.co/vCcUB6vAMz